DONALD Trump’s closest adviser is a small boy who is the biggest bullshitter in his school, it has emerged.

10-year-old aide Nathan Muir, who claims his dad has a Ferrari, is believed to be behind claims of a Swedish terror attack.

A White House insider said: “Nathan has totally captivated the president with wild claims about beating a crocodile in a fight and how he’s already seen the new Star Wars film even though it hasn’t been made yet.

“Even for a little kid he talks a lot of shite.

“He’s convinced Donald that Transformers is a documentary. It’s a worry.

“Every night they’re up late in the White House, discussing aliens and drinking shitloads of Fanta.”

Muir, who also claims his mum let him watch Saw 4 when he was seven, said: “My dad is a secret agent and he told me that Iran has a secret army of man-monkeys called humanzees. He showed me a picture but you can’t see it because it got deleted by accident.”

Donald Trump later tweeted: “I will protect American bananas from the hairy hand of the humanzee.” 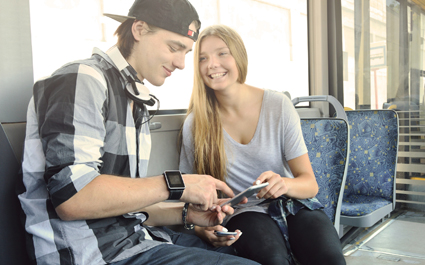 TEENAGE bastards playing music on a bus are fully aware that it is annoying everyone else, it has emerged.

Tom Booker, 15, and his friend appear to be merely inconsiderate but are actually getting a massive pathetic thrill from the pointless antagonistic situation.

He said: “So far no one has suggested turning off the tinny dirge coming from my phone, which is obviously a huge victory for me.

“I have successfully demonstrated I will not be fucked with by an elderly female pensioner, several glum office workers and a harassed mum with a crying baby. I am the king of the bus.

“The best thing is the way people want to say something but can’t pluck up the courage. Imagining how they must despise themselves just makes my fiendish mind games all the more delicious.

“If confronted I would actually just use one of my hilarious put-downs, such as muttering ‘prick’.”

He added: “If you’re white provincial teenagers from a village near Worcester it’s traditional to pretend you’re an intimidating street gang.”

Booker’s music was later abruptly turned off when a large Polish builder sat near him.