Turin Shroud back on display with added Nike swoosh

THE Turin Shroud has been updated to reflect that Jesus would have worn mid-priced sportswear if he were alive today.

Pope Francis authorised the addition of the Nike swoosh to make Jesus seem more relevant to today’s youth. An order of blind Italian nuns laboured for five years to embroider the swoosh using thread spun from the hair of a thousand Catholic virgins.

Cardinal Wayne Hayes said: “We liked the aesthetic of Adidas by Stella McCartney but didn’t want Jesus to seem like a posh wanker, whereas Hi-Tec at the other end would have made him seem like a schoolkid who was crap at PE.

“Nike clothing would have made Jesus look cool during casual sermons, yet is sporty enough for him to work up a sweat doing something physical like overturning the tables of the money lenders.”

15-year-old tourist Nikki Hollis, who was among the first to view the newly unveiled shroud, said: “I can see what they’re getting at but everyone at school is into Jack Wills now.

“What is cool though is that these people are mental enough to think that some vague splodges on a bit of old linen are the imprint of Christ. Are they all on crystal meth or something?”

Hillary Clinton to use You Oughta Know as campaign song 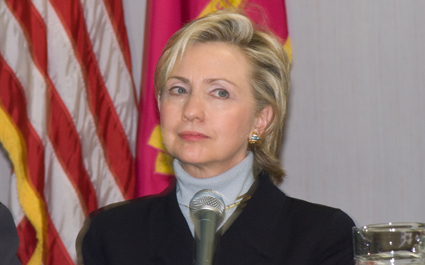 US PRESIDENTIAL candidate Hillary Clinton is to use nineties Alanis Morrisette song You Oughta Know as her campaign anthem.

Clinton said: “I just like the energy and catchy hook of this song about a scorned, vengeful woman.

A spokesman said: “We will probably cut out the line, ‘Would she go down on you in a theatre?’ but aside from that we think it gets her message across pretty well.’

“Oh and the bit where it goes, ‘Are you thinking of me when you fuck her?’. Although we will probably just bleep that in the Southern states.”