Would this be a bad time to say your new plan's bollocks? asks EU

THE EU has asked if this is a bad time to mention that May’s Chequers Brexit plan is bollocks that they reject completely.

EU chief negotiator Michel Barnier left a message with Downing Street saying that he knows we are very busy infighting and does not want to interrupt, but that the plan is just as shit as the other two.

He continued: “This is like watching a dog jump off a cliff chasing a stick when you had only pretended to throw the stick.

“Certainly I was pleased to see Boris go, until he was replaced by Jeremy Hunt. And if the new man turns up I will definitely learn his name.

“But the plan which is so controversial is very much like the previous plans and the plans before those. Britain keeps all bits it likes and no bits it does not. How many times can we say no? How many languages?

“Please don’t have another election. I have not the strength to go through this again with Jeremy Corbyn or Jacob Rees-Mogg.

“Is this the strategy? Just to wear us down? I have to say it may be working.”

Woman getting tattoo confident she'll regret it her whole life 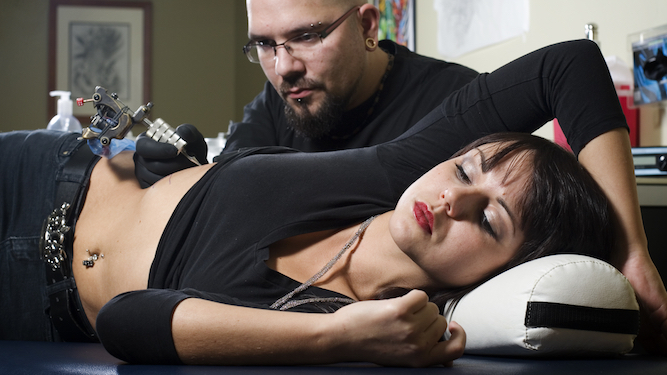 A WOMAN getting a tattoo is absolutely sure she will regard it with thinly-concealed regret until she is old and grey, she has confirmed.

22-year-old Nikki Hollis decided to have ‘Live, Laugh, Love’ tattooed prominently on her abdomen after a full fifteen minutes flipping through a portfolio of generic designs.

She said: “Yep. This is the one. I already don’t like it a bit and he’s barely started.

“Although it might seem like a snap decision, given I’m only doing it because my mate Hayley’s having one too, I’m pretty sure I’ll still be grimly ashamed of it when I’m a middle-aged mother of three.

“What’s great about ‘Live, Laugh, Love’ is that it’s a meaningless platitude on so many levels. I really look forward to telling the care workers how much I hate it when I’m in a home.

“Ah well, they say you only regret the things you haven’t done. Actually that’s a really irritating, trite and obviously false sentiment. Maybe I’ll get it tattooed on the other side.”

Boyfriend Tom Logan said: “I would never have a tattoo I’d regret. I’m going to get a whole sleeve.”