BRITAIN'S xenophobes were last night celebrating the arrival of an enormous, foul-smelling metaphor wafting over the channel from continental Europe.

As millions of people across southern England complained of a strong, sulphurous odour, politicians, newspaper columnists and right-wing bloggers scrambled to be the first to compare it to the familiar stench of EU corruption.

UK Independence Party leader, Nigel Farrage, said: "This is the same smell you encounter in a Strasbourg toilet.

"It's the smell of thousands of dirty Frenchman eating your tax money and washing it down with frog juice.

"Then they pull down their filthy trousers, squat over a massive, subsidised ditch and evacuate their corrupt, socialist bowels all over a photograph of Shakespeare."

Daily Mail columnist, Peter Hitchens, said: "It seems this foul odour is emanating not from the homosexual atheists at the BBC, but from that cesspit of state-funded multi-culturalism across the English Channel.

"Do we need any more proof that the European Union is worse than four asteroids hitting the Earth simultaneously and that Frenchmen are no better than diseased ferrets?"

Shadow foreign secretary, William Hague, told The World at One: "It would appear someone has inadvertently emptied the lavatories on the EU gravy train.

Putin To Propose At Sushi Restaurant 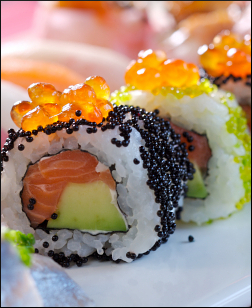 RUSSIAN President Vladimir Putin is to propose to his girlfriend at his favourite Moscow sushi restaurant, the Kremlin has announced.

Putin has told friends that he is fallen in love with former gymnast Alina Kabaeva and hopes very much that he will not have to crush her.

"She also understand importance of gas. We stay up all night, drink champagne, talk about gas. Then she bend for me. I very happy."

Putin has ordered a romantic evening at Moscow's premier sushi bar, including a judo demonstration and a short film about Russian exports.

He has also agreed a series of hand signals with the 'head waiter', depending on Miss Kabaeva's response.