'Get Your Bumcheeks Out Of My Face'

MINI-SKIRTS have risen to record levels making it virtually impossible for men to travel on escalators without being exposed to women's buttocks, a new study reveals.

In the last year skirts have shrunk in size from 'Christ, I've seen wider belts' to 'masking tape' to 'bloody hell, I can see what you had for dinner'. Further shortening is forecast for July.

More than 68% of men said they were now too scared to use the top deck of the bus in case they met a lady on the stairs and came face to face with either of her bottoms.

Tom Logan, an electrician from Bolton, said: "I'm at the Arndale Centre, I get on the escalator, minding my own business. Next thing, I look up and there's two great pillows of flesh bearing down on me like an angry sumo.

"If someone had hit the emergency stop button, I'd have been wedged up to my shoulders in bum. They'd have had to get the fire brigade to prise me out of there. And I'd have lost my glasses."

Roy Hobbs, an accountant from Croydon, said: "I work in a very female environment and I'm getting a stiff neck from constantly trying to look straight ahead.

"I was in a meeting last week when this girl from sales uncrossed her legs. No panties. At first glance it looked a bit like Anthony Worrall-Thompson."

But Bill McKay, a veteran pervert from Leeds, said he was cancelling his subscription to Front Botty magazine after 35 years.

"All I need is my free bus pass and one of them camera phones." 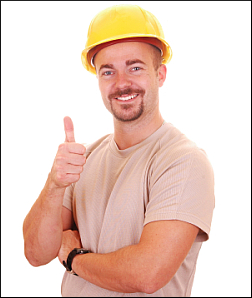 THE Office of Fair Trading last night defended taking four years and millions of pounds to discover that builders might just be at it.

The OFT launched the investigation amid concerns that builders' quotes seemed to be drawn up in some strange, parallel universe where everyone who is not a builder is an idiot.

Wayne Hayes, who made the initial complaint, said he was surprised the investigation had taken so long.

"To be honest, I thought if I walked into the OFT and made a complaint about how builders can be a bit dodgy they would take one look at me and go, 'D'UH!'

"Then I thought they might stick their tongue inside their bottom limp and wobble their head around going, 'mmmm, mmmm, mmmm, mmmm' and call me a 'spazzy'.

"But instead they were like, 'Really? Are you serious? That's incredible', and then put half their staff on to it."

It is the OFT's first major, national investigation since it spent three years and £5 million discovering that there was actually nothing wrong with your exhaust.

Mr Hayes added: "I know I can't build an extension on my own, but does that give some fucking Sun reader the right to charge me 800 quid a day to ruin my garden and show me photos of his six bedroom villa in Santa Ponsa?"