A 45-YEAR-OLD man has appealed for help after making the calamitous error of sitting on a bean bag at a friend’s house.

Mistakenly believing that his knees were still up to the challenge of standing up again in one smooth movement, Nathan Muir instead spent 10 excruciating minutes trying to extract himself from the flaccid chair.

Muir said: “What was I thinking? At my age it was an act of hubris to sit in this damn thing. Bean bags are a young man’s game.

“Probably the only way to get out of this mortifying situation is to roll over onto all fours and lever myself up using an armchair, like an old lady who’s had a fall. However this ends, it’s going to be highly humiliating.”

Muir’s wife Charlotte said: “Honestly, the state of him. It’s like looking at a beached whale. But at least a whale is graceful in the water, whereas Nathan is an awkward lump in all environments.

“I’m pretty sure I’ll look back on this as the moment where any lingering sense of attraction I felt toward my husband died. Do you think I can cite it as a legal reason for divorce?”

Toilets are meant to be dirty: The recently divorced man's guide to domestic chores 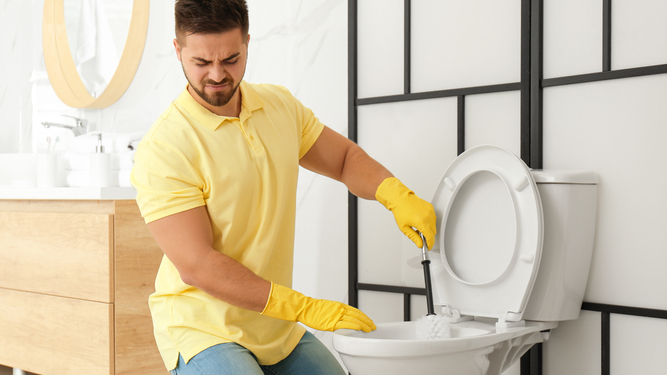 ARE you a man who’s sadly got divorced, but also thrown off the shackles of domestic servitude? Here Tom Logan gives his advice to other liberated, unhygienic men.

Toilets are meant to be dirty

I can’t believe the amount of money my ex wasted on Domestos. A toilet should show its battle scars. Every brown streak is like a war medal. If a woman disagrees, try a different tack and tell them waste from bleach factories is turning millions of dolphins albino. It’s probably true.

In fact, everything’s meant to be dirty

Face it, cleanliness is just a waste of beer time. If you face the dirt down and show it you’re not bothered, it soon gives up. It’s a much better atmosphere around the house too if you and domestic filth can reach an understanding and learn to put up with each other.

If your duvet needs to be cleaned, it’ll go to the washing machine itself

I’m serious about saving the planet, unlike my ex-wife who’s all ‘Ooh, let’s have eco washing power but have the washing machine going 24 hours a day’. Clean your duvet once a year maximum, although every two years is more environmentally aware. Sure it smells, but it’s a ripe, manly smell that’s sure to turn on the ladies, if one ever ends up in my bed again.

Parking your motorbike in the kitchen is just common sense

Sure there’s oil dripping on the tiles and it’s a bugger banging your knee against it when you’re opening another tin of beans or having a piss in the kitchen sink. But in these enlightened times you wouldn’t make your dog sleep in the garden, so why your equally beloved bike? My wife made me sleep in the garden once when I’d had a skinful and it’s not nice.

Looking through windows is boring

Being able to see out of windows is overrated, so leave the dirt be. It’s not like you look out of the window in Stevenage and see Mardi Gras floats or a WW2 dogfight going on. Also a healthy layer of dusty grime probably protects the glass, or something.

If you pathetically can’t accept the dirt, get a cleaner in if you must

I’ll admit that not emptying the kitchen bin for five months was a bit too long. So I got in Petra. Nice lady. In fact, we hit it off and we’re going on a date next week. She says she’s seen more revolting shitholes than mine. I think she might be ‘the one’.