Anyone referring to 'smarts' can f**k right off

PEOPLE who say they or anyone else has “got their smarts” should fuck off, everyone has decided.

Britons feel the Americanism that just means ‘to be intelligent’ is so annoying anyone using it should be made to stop with extreme verbal abuse.

Teacher Emma Bradford said: “Just seeing some fucker refer to ‘smarts’ on a website makes me want to smash my computer and the desk it’s sitting on for good measure.

“But hearing someone say it out loud causes a powerful urge to slap them repeatedly while shouting ‘STOP SAYING THAT NONSENSE, YOU ARSE!’. And that would be entirely reasonable.

“You’d actually be doing them a favour because it might prevent them becoming a vacant, trend-following cretin who thinks it’s cool to say ‘pants’ instead of ‘trousers’.”

Office worker Martin Bishop said: “I hate it most when someone says an actor has ‘got smarts’, as if deciding to appear in a mega-successful Jurassic Park movie was a really shrewd decision.

“Actually, no, I hate it more when people say ‘street smarts’. That implies they’re not only a trendy idiot but also the sort of prick who thinks they’re ‘streetwise’.” 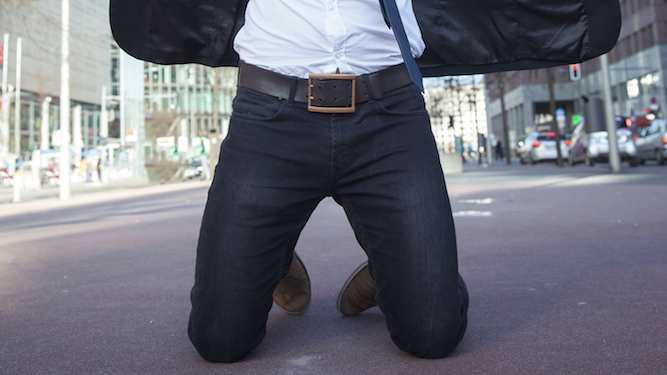 A SLIGHT breeze has brought a man to his knees with blessed relief, witnesses have confirmed.

Stephen Malley of Bury St Edmonds in Suffolk felt the cooling zephyr pass briefly over his burning skin and claimed it offered a vision of a better world.

He said: “Life before the heatwave came back to me in that moment, like a religious experience.

“Such vivid sensations and memories. Pulling a jumper on in the house. Thick socks. Putting your hands in your pockets for warmth, not to briefly rearrange your sweating bollocks. Goosebumps!

“I swore to myself then and there that one day I would feel them again. One day I will be able to walk 100 metres without looking like I’ve run a fucking marathon. One day it will be too cold for flip-flops.

“God, remember the Beast from the East? How we loved it?”