B&Q has announced that men aged 45 and over can make their birthdays truly special by holding them in their favourite aisle of the store.

The DIY giant is to seize a slice of the party market by catering to middle-aged men who can only experience contentment while wandering their stores, who are allowed to bring six taciturn friends.

B&Q party co-ordinator Nikki Hollis said: “Does the husband or dad in your life react with irritation when called in from the shed to celebrate his own birthday? Here’s the solution.

“Whether they prefer screws and fastenings, steps and ladders or garden equipment, we’ll set up tables, chairs, and cans of warm beer for them and their guests.

“The parties will cater for all dietary requirements and allergies, particularly foods that don’t give heartburn or flare up gout, without any fuss or ceremony. You’ll never have to break off an animated discussion about jetwashing to sit through ‘Happy Birthday’.

“They’re then treated to a visit from a shop assistant who answers three of their questions, allowed to roam the whole store with measuring tape to make whatever inscrutable pencil notations they like, and sent off with a lucky bag of Kendal Mint Cake, assorted nails and washers and a ten per cent discount voucher.”

Birthday boy Stephen Malley, aged 54, said: “It was bloody brilliant, until until my team lost the Guttering Marble Race because of Roy Hobbs’s shoddy sealing. He’s not invited next year.”

Freedom of movement and lots of lovely immigrants: David Davis talks you through his Remainers' Brexit 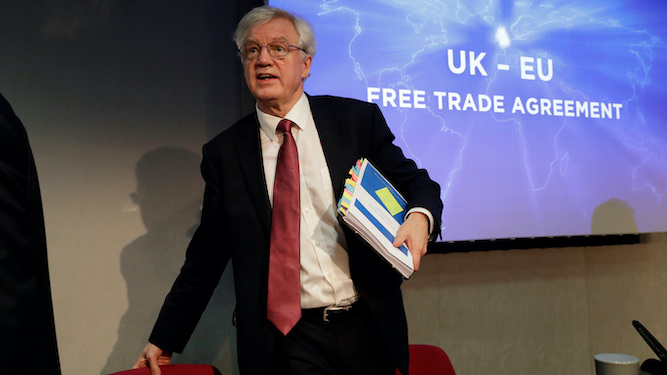 STAUNCH ally of the EU David Davis has outlined the benefits of his recently unveiled Remainers’ Brexit. Let him lead you through it:

As an architect of Brexit, I knew taking back control of our borders was only a precursor to abolishing them entirely. Because without borders Britain will be a beacon to the best and brightest, zipping across the Channel to fill our desperately needed job vacancies. Our workshy can’t fill them because our incredible economy is booming right now.

Where would we be without immigrants? Exactly. That’s why my Remainers’ Brexit allows them to enter freely and stay for as long as they like. Only an idiot would try to shut them out without properly calculating the devastating risk. Thank Christ the open and tolerant people of this country would never vote for such a thing.

Our dreary navy blue passports, made in Poland by a French-Dutch company, do nothing to instil national pride. Under my arch-Remainer plans they’ll all be declared illegal next year, replaced by a bold, buccaneering burgundy. A quick flash of this bad boy will see you through an EU airport queue in no time.

The Protocol in the Withdrawal Agreement, which I personally cheered on until signed into law, was a prank. I can’t believe so many of you fell for it. My secret Remainers’ Brexit protocol sees us legally bound to adhere to the same rules as the Republic of Ireland. It’s basic common sense and I’m amazed nobody else thought of it.

Our Remainers’ Brexit wil only be complete when we rejoin the European Union. Once we’re members we’ll be able to export goods to trading partners on our doorstep, and we can rinse them for funding grants. Again, this was the plan for Brexit all along and this is a relatively trivial set of adjustments. Let’s not have any fuss.