Check-in 10pm, check-out 4am and other unreasonable rules of your holiday accommodation

FINDING a holiday home in the time of Covid is not only a coup but also a massive faff, involving more inconvenient rules than ever, like these:

No check-in until 10pm

Due to strict hygiene protocols, the cleaners will need all day and most of the night to wipe away the filthy germs from the last guests. Unfortunately this means you will not be able to arrive until it’s too dark to find the key box, let alone unpack the car or feel any excitement about this lovely break you have planned.

If the place you are staying is some git’s second home, they will have filled it with all the weird shit they are too embarrassed to have in their own home and yet too tight to replace with new stuff. Prepare for a set of plates from an old tin mine museum, a random wooden African sculpture, and five well-thumbed John Grishams.

Separate the recycling according to the local council’s 527 rules

The last thing you want to do on holiday is be responsible for the environment but chucking everything in the bin will not go unnoticed by your militant hosts. The 153-page laminated folder that comes with the property will offer detailed instructions on exactly where to put tins, when at home you normally bung everything in one bag and hope for the best.

Vacate the property by 4am

You can’t pack up and go in the early hours without leaving the property looking like a total shit heap, but this is what the Covid cleaning protocol dictates. This means you must undo the minor amount of relaxation you accrued on holiday and stay up all night bleaching the bannisters until it’s time for check out.

At the end of the week, you will be depressed and angry that you have paid an eye-watering amount of money to uproot your life and spend a week cleaning someone else’s badly styled home. Next year’s holiday will be camping in the garden. 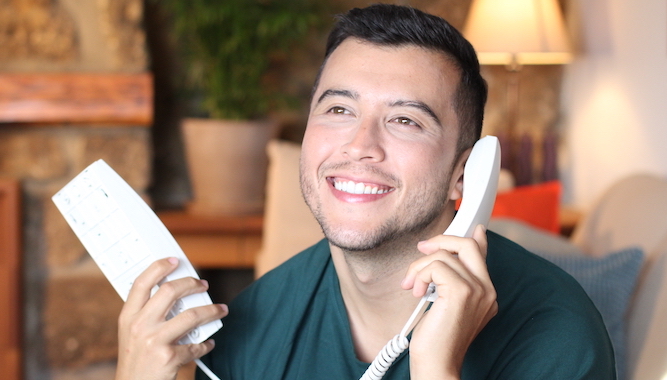 LANDLINES are to be axed by the year 2025. Here are five things you used that humble copper wire for before the internet came along.

You’d see an advert for Clubcall on Teletext announcing that your Fourth Division team was ‘finalising Shearer deal’. You’d call the premium-rate number and eventually discover they weren’t signing Alan, but someone called Terry Shearer, as physio. Then you’d have to explain the subsequent £30 charge on your dad’s itemised BT bill.

You’d come in from a disappointing night down the pub, and between Tour of Duty and Highlander: The Series, see an advert promising an instant, sexy phone party with ‘like-minded fun people’. In reality, it would just be you and some bloke from Redditch talking about his job selling PVC windows, because all the genuinely fun people were out at real parties.

Before Spotify, if you wanted to hear a song you liked, you had to either wait for it to come on the radio, get on the bus into town and buy the record, or call Dial-a-Disc. It was too expensive to listen to the full track on your landline, so you’d end up feeding all your pocket money into the local phone booth, which at worst had been smashed up by yobs and at best was full of piss.

Before the days of mobile phones, if you didn’t have a watch you’d have to get up, walk to the hall where the landline was, dial a long number on a rotary phone and listen to an automated voice tell you the hour. It was an arduous process, and would have been quicker and cheaper to pop into town for a Casio.

Maybe it was due to an atmospheric anomaly or too much static, but you’d often hear other people talking down the line. Usually the conversations were garbled or boring, but occasionally you’d really luck out and hear a couple engaging in sex chat.