Complaining about mixed-race families in TV ads, and other daytime gammon activities

DO you fill your time with activities many would consider boring, pointless and even downright racist? Here are the signs you’re a daytime gammon:

Politicians love nothing more than getting out and talking to ‘ordinary, average, normal’ people like you who spend all day hanging around the outdoor market waiting for TV crews. Whether you’re bollocking some Labour girl about potholes and pronouns or praising Nigel to the skies, your views deserve to be heard.

It could be golf, it could be snooker, it could be racing from Chester or cycling from Italy, but you’ve unexpectedly become a big fan of something that’s minimally exciting at maximum length. Not American sports, though. Not that you’re racist but.

You decide to call up LBC to defend Boris Johnson over the latest set of allegations, knowing you’ll find a sympathetic ear in Nick Ferrari. Unfortunately you’re in the queue too long and end up verbally eviscerated and humiliated on national radio by James O’Brien.

Having a swift half

At some point, your mind swirling with Richard Littlejohn columns, you conflated political correctness and health and safety. So now you believe drinking three pints at noon is one in the eye for lefties and so do all the other blokes like you. You meet at Wetherspoons and set the world to rights, by which you mean plan a fascist dictatorship.

Whether your arena of choice is the genteel hate-pit of the Telegraph, correcting the bias of the BBC or being the far-right voice your local newspaper refuses to publish, there’s no better way to while away an afternoon than standing up as the furious voice of moral authority to all these left-wingers with too much time on their hands because they don’t work.

Complaining about mixed-race families in adverts

To your mind – and you’re a reasonable person who believes in compulsory national service and the death penalty for cannabis possession – every advert featuring a mixed-race family is another step towards white genocide. You’ve even made a spreadsheet to record ethnicity and write daily letters of complaint to Ofcom with your findings. 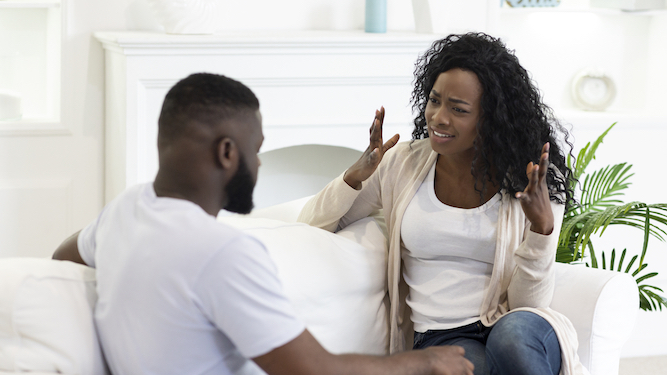 A WOMAN having a good whinge about work to her husband wishes he would stop interrupting with ways to help.

Carolyn Ryan was expounding at length about the various arseholes in her office while husband Matt continually broke in with supposed ‘solutions’ to her problems that she had not asked for and did not listen to.

She said: “I was telling him what an absolute knobhead Martin from finance is and he pipes up with ‘Well can’t you check this month’s figures against the same month last year?’ as if that was the point.

“So I took a deep breath and told him instead about Donna’s rescheduled hen weekend, and he says ‘Just tell her you don’t want to spend £130 on a Go Ape outdoor experience in Northamptonshire followed by mocktails in the rain.’

“Does he think I’m an idiot? I don’t need help solving it. He was supposed to agree, and stroke my hair and murmur gently that yes, Donna is a crazy bitch.

“I don’t come to him for a viewpoint that differs from my own. He needs to offer murmured assent, reassurance that I’m right in all things and a glass of wine even if it is Monday.”

Matt said: “Carolyn spends a long time telling me her problems, so I’ve concluded my role is to provide a rational, balanced perspective and provide solutions. But when I do this, she tells me to piss off and phones her sister.”