'Cottagecore', and other weird as f**k things young people are into these days

IN your day there were just chavs and goths but now teenagers are into all sorts of strange shit. Here are some of the weirdest.

If Gen Z can take something utterly mundane and make a pointless statement out of it, they will. Cottagecore is about fetishising an imagined country lifestyle by doing stuff your grandparents supposedly did, like crafting lace doilies and making jam. It’s not very authentic, or they’d be worrying about potato blight and polio.

Want to feel old? Well, young people are treating the year 2000 as if it’s a vintage era from the olden days and adopting its fashions. If you see someone wearing a velour tracksuit or a pleated skirt, you’re the idiot for laughing at them because it’s currently the cutting the edge of style.

This style is based around a muted colour palette of brown, burgundy and black, and features clothes like tweed blazers, waistcoats and smart shoes, all mixed with a general air of romanticised misery. It’s essentially dressing like a geography teacher, but if the geography teacher was suicidally depressed and in a weird sex cult.

It’s hard to know if Gen Z is just taking the piss, but normcore is based on ‘reclaiming’ normal clothes, which is the average middle-aged person’s wardrobe. The plainer your outfit is, the more stylish you are. Unless you’re over 25, in which case you’re just boring. You’re right, it makes f**k all sense. And the joke will be on them when they discover they unironically love their all-social-situations blazer and slightly stretchy jeans.

They’re definitely taking the piss with this because they haven’t even bothered renaming it. They’ve just pinched it wholesale, and it’s exactly the same as in the 90s: plaid, boots, choker necklaces, the works. And they don’t give a shit that you were there the first time round, because that means you’re so old that you might as well be dead. Like Kurt, who they may not have heard of.

Six childhood adverts that really took the piss with the truth 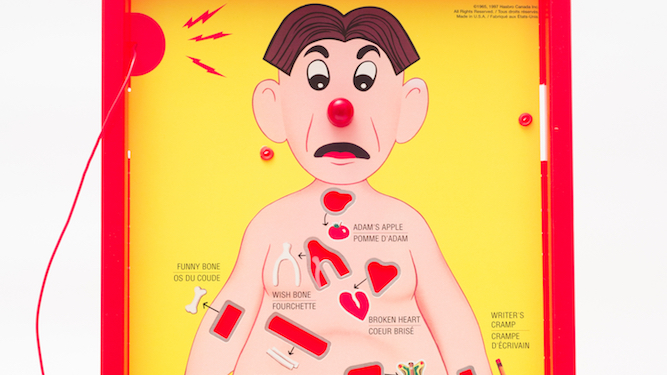 YOUR underdeveloped childhood brain wasn’t great at spotting lies in advertising. Here are some that really took advantage of the fact…

Matey removed the need for washing yourself

Matey bubble bath claimed to clean you merely by being in the bathwater. And you were thrilled to avoid the punishing effort of a quick wash, you lazy little shit. Except it wasn’t true and this revolutionary cleansing technique was actually just ‘sitting in warm water’.

The only difference these made was Action Man being able to move his eyes to the far right or left. All the fun of having an eye test and being checked for retinal bleeding. Was introduced around the same time as Bullet Man and the Intruder who didn’t fit with whole military theme, so maybe Palitoy just ran out of ideas that year.

Evel Knievel was in some way functional

These notoriously untruthful adverts claimed your Evel doll on a ‘stunt cycle’ could perform jumps, wheelies and leaps over ditches. Actually 19 times out of 20 he would travel six inches then topple over. This is not how the real Mr Knievel got his legendary reputation, unless he did a lot of very dull shows that weren’t on TV.

Milky Ways are good for you

Remember ‘the red car and the blue car had a race’? The fat bastard red car ate too much and fell into a ravine, whereas the blue car only ate Milky Ways, and thanks to their lightness won the race. A brilliant, if devious, way of convincing mums Milky Ways were good for kids’ health. However most dieticians would agree that too much sugar coated in sugary chocolate (basically the Milky Way recipe) will eventually cause tooth decay, obesity and death.

The lorry driver in the advert got admiring looks from pretty ladies and loved his work. Actually driving overnight to Dusseldorf is knackering, lonely and not as well paid as you’d think. If you’d fallen for Rowntree’s propaganda you’d currently be an unhealthy 50-something worrying about losing his job while sitting in a 20-mile Brexit queue outside Dover.

Every household in the UK seemed to own this organ removal game. The advert made it look thrilling but any child with a steady hand (ie. you weren’t an alcoholic aged seven) quickly got the hang of it and lost interest. It’s unlikely humorous treatments such as removing butterflies from the patient’s stomach set any kids on the road to medical school, but it may have whetted the appetite of the odd serial killer.