Couple in their 30s recovering after terrifying trip to Urban Outfitters

A COUPLE in their late 30s are recovering at home after accidentally wandering into an Urban Outfitters.

Emma and Nathan Muir went into the shop in search of a gift for a friend but found themselves trapped in a terrifying maze of fashionable sportswear and quirky millennial trinkets.

Nathan Muir said: “The vast array of urban street wear immediately made me think, ‘Uh oh, we’ve walked into a scooter gang hideout which is also probably a crack den.’

“But as we tried to walk out I saw loads of merchandise for the TV series Friends, which was popular on Channel 4 when I was young.

“Gangs are bad enough but now I really just wanted to get out of there in case we’d entered some sort of timewarp.”

Partner Emma said: “There were gifts but they were strange, useless books, like guides to cooking with avocados, or retro record players no one would ever use. It all felt very fake and slightly evil.

“They were definitely taunting me with the idea that I can’t wear a cropped puffa jacket and denim hotpants and still look cool at my age.”

The couple are now slowly getting over the shock and even enjoying their new mini waffle maker, which, in their dated old-person language, they described as “wicked”.

Things you've been doing wrong for years according to bullshit articles 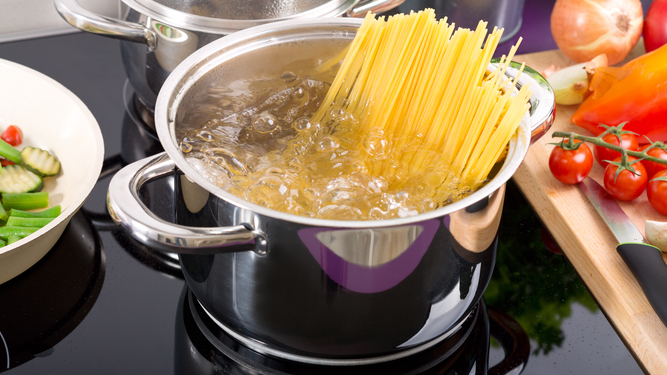 FROM eating pasta to putting on your socks, you’ve probably been doing it wrong for years – at least according to articles like this. Here’s how to correct your mistakes.

You’ve probably been boiling it in water with a pinch of salt, right? WRONG! Italians soak their pasta in a bucket of cold water for a week, put it in a liquidiser and suck it up through a straw.

Most people just tie a simple bow then walk around all day without problems. This is clearly inadequate. Tie your laces with a double half hitch knot (ask a sailor), put superglue on so it goes solid, then nail your shoes to your feet.

You probably build your horrific effigy first and bundle the human sacrifice in later. But it’s much easier to tie up your victim and build the wicker man AROUND him before hauling it erect with ropes and setting fire to it.

Here’s a brilliant ‘life hack’ we got from some tit on the internet – buy orange Tropicana with bits in and freeze it in 4” spheres. Hey presto, ready-peeled oranges with no mess and no fuss.

You probably think you’ve got sex figured out, but you’re actually meant to just hold hands and wait for a stork to bring you a baby. Sex is actually a relatively modern invention dating back to the 1940s when only a few people had televisions.

Getting Tic Tacs out of the box one at a time

Avoid the nightmarish struggle to dispense Tic Tacs one at a time by having more going on in your life than fucking Tic Tacs.