Do you live in a shitty new-build? Take our quiz

DO YOU live in a crappy little new-build house on an estate full of them? Find out with our quiz:

How close is the ceiling to your head?

A) A good couple of feet away.
B) A mandatory four-and-a-half inches.

How many rooms do you have downstairs?

How identical to your house is the neighbours’ house?

A) Well it’s a semi-detached, so they’re basically mirror images of each other, except they’ve got a conservatory and the previous owners of ours did a loft conversion.

How many bedrooms do you have?

A) Four, but one of them’s only a box room really.
B) Five, but four of them are only box rooms really.

How many en-suite bathrooms do you have?

A) Just the one, in the aforementioned loft conversion.
B) Four. One in the big bedroom and three making already tiny bedrooms small and L-shaped.

How big is your garden?

A) It’s got about the same footprint as the house, so big enough.
B) Very small and triangular. But that hasn’t stopped us putting a trampoline in it, and a sandpit, and a summerhouse, and a garden sofa, and a barbecue area, and a hot tub.

How much parking space do you have?

A) Room for one car on the drive and one on the pavement outside. That’s the problem with these older houses.
B) Absolutely shitloads. Room for four cars on the drive and another two on the road. Well that’s what’s important, isn’t it?

Mostly As: Congratulations, you live in a house larger than a shoebox that doesn’t require a garage conversion and conservatory to be remotely liveable. Draughty though. 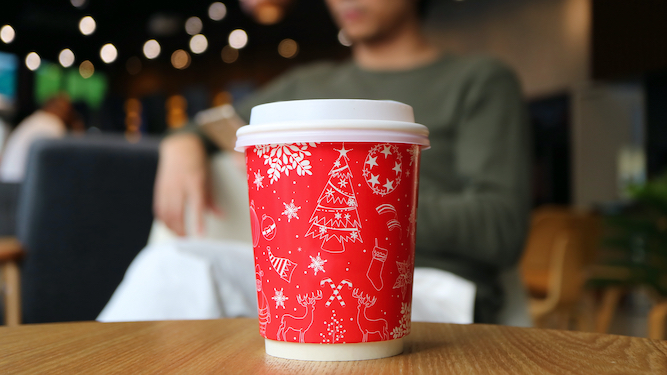 AS part of their latest line of Christmas beverages, Starbucks have announced a coffee that mimics the taste of an entire roast ham.

Coming hot on the heels of other festive favourites such as eggnog latte, the coffee chain is confident people will want to force a disgusting drink down their throats simply because it is December.

“It’s utterly vile but we’ve discovered that consumers will pay through the nose for anything if it contains a shitload of sugar and comes in a cup with a reindeer on it. Exploiting thick people with too much disposable income is an excellent business model, it turns out.”

Customer Jack Browne, who sampled the Christmas Hamuccino, said: “F**k me, that’s disgusting. It’s like someone threw up in a cup on Boxing Day.

“I’ll still spend a grand total of £139 on these over the course of the next month though. It is Christmas, after all.”