A MIDDLE-CLASS couple have leapt up at least two rungs on the social ladder by being the first in their circle of friends to buy a fire pit.

Julian and Hannah Cook will add the pit, which they expect to use at least twice this year, to the hammock, carp pond, swing seat and chiminea already cluttering their garden to the point of unusability.

Mr Cook said: “Being middle-class isn’t about income. It’s how you spend it.

“In winter we’ve got the log-burner and skiing but in summer it’s about outdoor accoutrements, and this is the largest and most unnecessary yet. We’re thrilled.

“Thanks to gimmicks like this, switching our summer holiday from Portugal to Sicily and naming our son Claude we’ve successfully moved up from lower-middle to mid-middle. I no longer feel like a fraud when I buy sourdough.

“It’s fantastic. We haven’t added this many points in one go since I decided I was gluten-intolerant.”

However, later that day the Cooks found themselves five points down after mistakenly posting their aspirational photo of their feet warming by the fire pit on Facebook instead of Instagram.

It's okay to lose as long as you try your very best, fans assure England 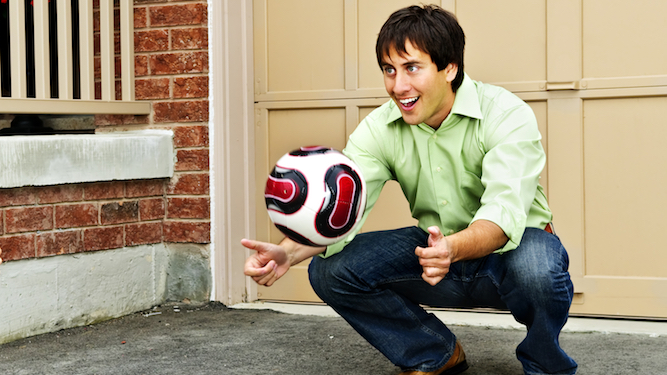 ENGLAND fans have reassured the World Cup squad that they will still be just as proud if they win or lose as long as they try their hardest.

The team have been told not to be nervous, that they are to enjoy themselves and that we will still love them just as much even if they lose six-nil.

Fan Nathan Muir said: “Hey. Hey. You’re my superstars just for making it this far, alright? Don’t go getting yourselves all worked up.

“It’s not about winning. What I want is for you to go out there and do as well as I know you can and show everyone how hard you’ve practised.

“We’re still going out for your special treat after this whatever the result is. All I want is for you to do your absolute best right to the end of the game, and not be looking at me mouthing ‘I’m bored.’

“Go on. Good lads. Your country loves you very, very much.”

Muir could later be seen screaming “Fucking kick it in the fucking goal, you useless fucking bastards!” while red-faced and furious.