YOUR 2019 self didn’t have a clue about the shitstorm that was heading their way. Here are five now commonplace activities they also couldn’t have foreseen.

They’re doubly annoying because you’re taking up as little room on the pavement as possible. You from last year would never have guessed that a simple stroll to the shops would leave you hating your fellow man.

Realising you forgot your face mask

Usually as you’re about to step into the corner shop to buy milk, forcing you to choose between going all the way home or pretending you’ve got an invisible health condition. You can always opt for the latter, although why you think affecting a limp will make it any more convincing is anyone’s guess.

The idea of being directed by arrows in supermarkets would have sounded ridiculous in 2019, and for a lot of people in 2020 it apparently still does. Luckily it’s dumb and selfish when other people ignore them, but when you do it to grab a bag of Revels it’s totally justified.

Wondering if Donald Trump has f**ked off yet

We all hoped Trump would be out on his arse shortly after he was sworn in. But we forgot he’d be able to hang on in there for months after losing the election. Still, it will be worth it when he’s finally dragged out of the Oval Office by his hair and thrown in jail.

Knowing who Chris Whitty is

The physician and epidemiologist is very much the breakout star of 2020. Before this year you would’ve taken one look at him and assumed he was a beleaguered, possibly hungover, substitute teacher. Now he’s famous enough to take over from Graham Norton, or at least go on I’m A Celebrity.

'Nailing' and other words arseholes use for 'having sex' 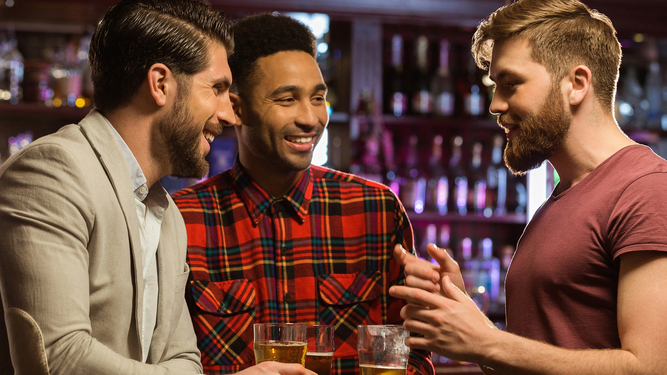 IF you love telling everyone about your sexual exploits you’re probably already a bit of a tosser. But if you use any of the following terms you’re definitely a prize arsehole.

“And then I nailed her”. Charming. Most likely said in a loud and boastful voice in a bar or university setting by someone pretending to be confident. The DIY imagery also makes lovemaking sound as sensual and romantic as creosoting a fence.

Conjures up a neanderthal, almost beast-like image. Also a very crude term, which implies you’re the sort of person who will be following up your shagging tale with jokes about farting and a grim anecdote about a mate shitting themselves after an ‘epic’ drinking session.

Just no. Anything that sounds like an act of destruction is completely the wrong language to use to describe sex. Fortunately it’s the sort of aggressive overcompensation that suggests you’re not getting much.

“When was the last time you got laid?” is a question asked by boastful studs who are not in the least interested in your answer, except to watch you squirm if it was ages ago, and who will just interrupt anyway to tell you how many times they ‘got laid’ in the last week. Twats.

As if hearing someone bragging about having sex was not irritating enough, to hear them claiming that they ‘gave her one’, as if they have nobly donated a prized gift to the other person, is beyond reprehensible.

Going all the way with/getting my way with

‘Going all the way’ sounds like finally completing the hardest level of a computer game rather than making love. Meanwhile ‘getting my way with’ sounds more like grinding the other person down till they give in. But in fairness you probably don’t realise this because you’re an arsehole.