YOUR holiday is booked, but your flabby mass is nowhere near beach body ready. Here are your worst features and how to disguise them.

Consistent exercise over the past couple of months would have slimmed these down. But you couldn’t be arsed, which is why you’re a fat bastard in the first place. The best solution is to bind your legs tightly with sellotape and hope it squishes some of the flab up into your shorts/bikini.

Only one course of action here: an impractical crash diet and extreme exercise. Your body won’t have time to process the effects of five hours in the gym every night and a diet of low-fat yoghurt. However, as anyone who’s just started exercising knows, you feel as if you’re really healthy. So you can lurch around bars pestering women with the confidence of Chris Hemsworth, not realising you’re more like a sunburnt Chris Biggins.

Does your delicate, English rose complexion resemble a ghost with anaemia? You’ll feel very self-conscious when surrounded by healthily tanned Europeans so overcompensate by slapping on some fake tan. If you don’t immediately look bronzed, slather more on, and more. When you suddenly look like Peter Sellers doing a particularly offensive impression of an Indian, you’ve cracked it. Just don’t do the accent.

Rippling muscles have been the male beauty ideal for years, but there’s no chance of getting bulging pecs and a six-pack in a week or so. You could try drawing them on with a marker pen, but you’re better off sticking with the all-purpose solution of the body-ashamed everywhere: baggy clothes. There could be the body of an Olympic athlete under that sweatshirt.

Or to use the correct dermatological term, gammonicus furiosa. You can lay off the booze and stop ranting about the lack of Rwanda deportations, but there isn’t time to reap the benefits of normal blood pressure. However it doesn’t really matter as chances are you’ll be holidaying in a Brit enclave in Spain where everyone looks like an angry red M&M anyway.

Are you in hell or at your nan's house? Take our quiz 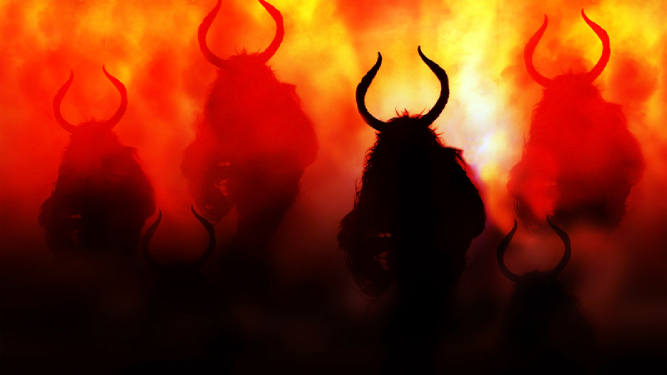 NOT sure if you are burning in the eternal flames of damnation or merely at your nan’s house? Find out with our quiz.

How hot is it?

A) Unbearably so. Even though you can’t see roaring fires lapping at your body it certainly feels like there should be. To make things worse a cruel tormentor in a bulky knitted jumper says they’re chilly and keeps bringing you boiling cups of tea.

B) Judging by the lake of lava you can see, very.

Are you being held against your will?

A) Yes. It feels like you’ve been here for an eternity, but every time you try to leave a wizened crone says can’t go yet because you’ve only just arrived.

B) Yes. Whenever you try to make a break for it a swarm of creatures with giant bat-like wings descend on you and carry you off to be dropped into a volcano.

What can you hear?

A) The screams of a tortured soul begging to be freed of their torment. No one else can hear it though because it’s coming from inside your head.

B) An album of Daniel O’Donnell’s greatest hits being played over and over again. It’s a worse punishment than that guy who has to push a boulder up a mountain forever.

What are you watching?

A) A dreary repeat of a documentary about Vera Lynn. The football’s on the other channel, but the remote is being mockingly clutched in your captor’s withered claw.

B) Legions of naked sinners shuffling along in bulky chains as a big red muscular man with horns on his head jabs them with a pitchfork.

What did you do to deserve this?

A) Nothing, You’ve been a dutiful grandchild who remembers to send your nan a birthday card every year. By rights you should be in the pub.

B) No idea. You’ve lived a good if unremarkable life. Although you did take the Lord’s name in vain a lot, which probably condemned you to an eternity of punishment.

Mostly As: You’re in the sweltering nether realm that is your nan’s living room. The framed photo of your graduation should have been a dead giveaway.

Mostly Bs: You’re a doomed soul who has found themselves in the underworld. Although at least you don’t have to listen to your nan repeat the same anecdote for the eighth time in an hour.