THE nation’s redheads have been carefully moved into darkened rooms to protect them from the sun, it has been confirmed.

As the heatwave gets fiercer, people with ginger hair have been relocated to shady basements and attics to shield them from the light which would fry them instantly.

Ginger Tom Booker said: “People with red hair are like antique oil paintings or ice cubes. If you leave them directly exposed to the sun then it’s only a matter of time until they’re completely destroyed.

“That’s why every year I have to be gently manoeuvre into a suitably darkened room for the duration of summer. As I’m a particularly sensitive specimen, I’m placed in a big shoe box lined with straw. Like a tortoise, except way more delicate.”

Strawberry-blonde Donna Sherridan said: “I spend autumn and winter preparing for this by foraging a huge stockpile of crisps and wine. But now the time has come to hunker down and wait for the harsh temperatures to pass.

“I’ll conserve energy by lying down and scrolling through my phone until October, at which point I’ll emerge into a chilly environment better suited to my fragile complexion. See you then.”

Covent Garden, and other places Londoners are horribly smug about never visiting 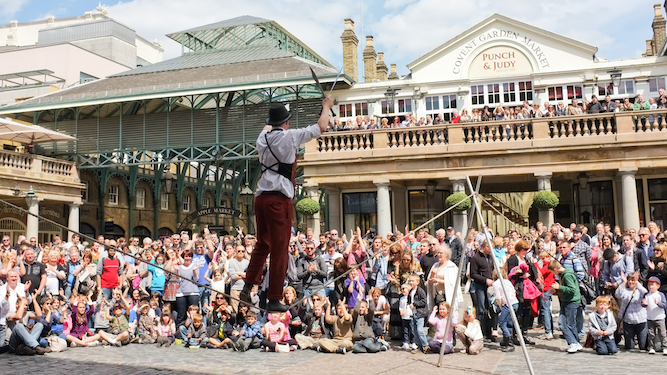 ALTHOUGH people who live in London are obsessed with telling you how amazing it is, there are plenty of areas in it that are beneath them. Like these:

Tourists visit Covent Garden because they think they’re going to be faced with a My Fair Lady-style cockney knees-up around a flower market, rather than 86 living statues and a traumatic pick-pocketing experience. London hipsters laugh at them as they spend £11 on a pint in Hackney Wick, having been robbed in a slightly trendier way.

Leicester Square has little going for it other than a cinema where you can spend £30 to watch a film that will out on Netflix in three weeks or go to the Angus Steakhouse, possibly the worst restaurant in the world. But we should all be glad it exists, if only to piss off the wankers walking through it to get to BrewDog in Soho, as if that didn’t also make them incredibly basic bitches.

Londoners deride Portobello Market as kitsch and tacky now, and claim it was much better 20 years ago. However, they’re wrong, so make sure to go and enjoy rummaging its many stalls for interesting bargains, while they spend Sunday morning at Borough Market blowing the best part of fifty quid on Italian charcuterie.

‘It’s just a road’, smug Londoners say. ‘And if you stop on the crossing you’re being a pain in the arse for the people who actually live here’. Well, sorry for having a passion. If you’re so miserable that you can’t bear to witness people enjoying visiting an important cultural landmark, why not go and live somewhere less interesting, like Croydon.

Londoners are incredibly disparaging about the UK’s premiere wax work museum, and, to be fair, you can’t hold it against them. It’s shit. Who wants to look at a lifeless, melted-looking version of Kylie? It might have been cutting edge entertainment when it was opened in 1835, but it’s best avoided by even the keenest tourist now.