DO you have downstairs neighbours? Do you want to make their lives a misery no matter what hour of the day or night? Here’s what to do:

Get a massive sound system

When living in close proximity with others, the most thoughtful thing you can do is invest in a f**k-off huge stereo system. Put wooden speakers on a wooden floor and pound out dubstep at 3pm, 3am, and every time inbetween.

Or any shoes with a hard sole – work boots, stilettos, wooden wedges – to simulate a herd of elephants roaming magnificently but emphatically across the savannah. Get a pair of roller blades to torture them further.

You think your children are annoying, but try being the people who live below the endless ceiling-shaking games of Floor Is Lava at 6am while you catch an extra couple of hours’ rest. If they complain they’re miserable child-haters, not reasonable people who just want some sodding sleep.

Due to the strange magnifying effect of your floorboards, what is to you a minor flare-up sounds like all-out domestic war downstairs. The combination of distress and anger will lead them to call the police, and then you can go down and shout at them for being nosy.

Develop a palette of mystery noises

More infuriating than recognisable noises are those that can’t be pinned down. Try setting up some sort of intermittent electrical hum or get up and shuffle about on one spot at 2.30am. By being both annoying and baffling your neighbour’s torment will be fathomless. 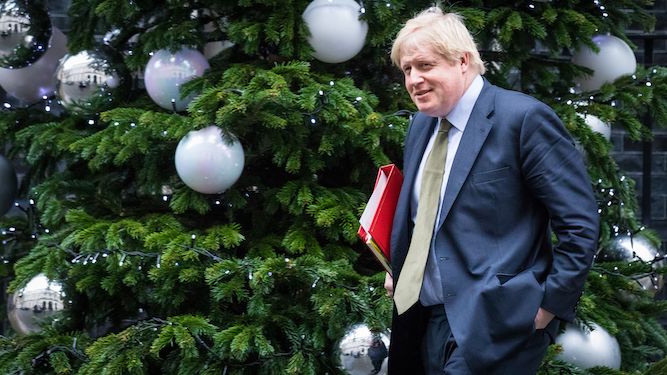 THE prime minister has announced plans to cause thousands of avoidable deaths in a scheme he calls ‘saving Christmas’.

Boris Johnson has confirmed that while lifting restrictions on mixing households in the middle of the second wave will cost thousands of lives and cause millions in damage to the economy, the headlines hailing him as the saviour of the festive season will be worth it.

He continued: “Isn’t it the most wonderful time of the year? Carols, mistletoe, presents, the To The Manor Born Christmas special?

“Yes, the boffins think we should stay locked down. No doubt the boffins would have told Churchill not to personally bayonet Nazis on Folkestone beach on Boxing Day in 1940 like he did in my biography.

“But I know, with my unerring feel for the mood of the country, that you’re all so desperate for a big family Christmas that you won’t mind the extra month of lockdown and 10,000 or so excess deaths one bit.

“So break out the tinsel, get everyone together, and let us worry about the consequences which will entirely fall on you guys. I’m saving Christmas. That’s what matters.”

Lucy Parry of Gloucester said: “This is fantastic news, and there’s no danger of this government prioritising good publicity in the short-term over the long-term good of the nation. Just look at their track record.”