How to feel edgy and cool at your nice, well-organised, middle-class festival

BOOKED a fancy festival? Convinced you’re the party animal of 20 years ago even though you’re sipping a Singapore sling in the poetry tent? Rock it like this:

Most days you dress like the token older contestant on The Apprentice. But fluff up your hair and adding flowers, face glitter and a ridiculous hat and it’ll be like you don’t drive a Range Rover Evoque. Add a beaded necklace and bang, permanent gap year!

‘Back to nature, man,’ you tell people as you look up at the stars, not mentioning you paid the extra £450 for a glamping yurt that comes with its own waffle maker. Close to nature, miles away from the hammered teenagers stumbling all over the cheap tents.

Claim to have heard of the bands

Only big festivals can afford the Radio 2 bands, so you’re stuck claiming that you definitely bought The Magic Numbers’ first album and you’re a massive Freya Ridings fan. Nod along in recognition to every track. Murmur ‘Bit of a deep cut, that one’.

If you wanted to, you could do drugs. Anyone could have offered you drugs. They probably did but you’re wearing bifocals so didn’t realise. And you’d take them, even though the most anyone in your social circle is carrying is ibuprofen gel for their dodgy hip.

Shrug off the queue for the toilets

Real free spirits don’t care if they get a UTI or aching guts from festival food. Do what any true hippy would and pee in the grass, to prove you’re above all that square rule-abiding hygiene bollocks. Buy the wristband to use the fancy showers the morning after.

To prove you’re young, mosh hard to every band. That includes the acoustic set at 2pm when you’re next to a picnicking family feeding twin toddlers. The harder you jump, the more of a legend you’ll be, definitely not like your mum pissed at a wedding. 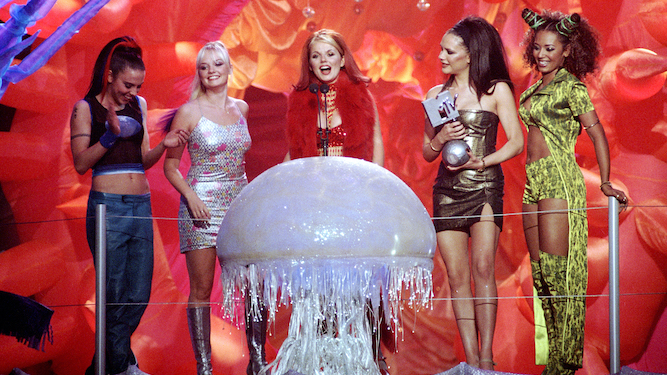 IF the lyrics to any song are even slightly ambiguous, that’s not because the composer was struggling to find rhymes. It’s because they’re about filthy vices:

No 80s party was complete without Agadoo and everyone, including your nan and grandad, dancing along to ‘push pineapple, grind coffee’. Grinding coffee is obviously sex, more specifically scissoring. Pushing pineapples is dealing crack cocaine. Once you’ve danced it you’ll want to do it for real.

Wannabe by the Spice Girls

The video, where the Spice Girls harrass the homeless before running wild in a hotel, makes it clear the ‘zig-a-zig-ah’ of the song is a street drug, probably heroin, injected into the male member. ‘Slam your body down and wind it all around’ is a reference to the muscle spasms linked to withdrawal.

Elsa, the girl who sniffs Alka-Seltzer through a cane on a supersonic train and has done it with a doctor on a helicopter, is clearly a cocaine user feeding her addiction through high-end prostitution. Oasis made this lifestyle seem so appealing that all of their female fans would have followed suit, if they had any.

A decade before Ebeneezer Goode there was an ecstasy anthem by 80s comic Russ Abbot. School discos played the track, innocently unaware it was about ecstasy-fuelled raving and the Ibiza Balearic scene. How else are lines like ‘you and I’ll be dancing in the cool night air’ – a reference to E raising your body temperature – to be interpreted?

Walk the Dinosaur by Was (Not Was)

The band claimed it was about nuclear armageddon, but it’s clearly a call to arms for doggers. ‘Walk the dinosaur’ is dogger code for ‘leaving the house to meet complete strangers in a layby off the A505 to bang someone’s wife over the back of a Kia Optima.’ The lyric ‘you fell asleep, I stayed awake and watched the passing cars’ was written on a quiet night.