Is this man's hat his new look or is he going bald?

DESPITE rarely wearing a hat previously, 32-year-old Jordan Gardner has taken to wearing one on all occasions. But is it a style choice or is he hiding baldness?

The hat looks absolutely bloody awful. He’s wearing a trilby in a crowded bar, thinking he looks sophisticated, while in reality he just looks like some sort of jazz pervert. Given how little it suits him, he must surely be covering up a receding hairline?

On the other hand, he looks enough of a pompous twat to be entirely oblivious to how arrestingly garish it looks. It’s possible he’s so full of himself that he honestly looks in the mirror wearing a trilby and thinks ‘Yes, I would like the world to see me in this.’

That said, the bar is well over 30 degrees and his head is visibly sweating. You’ve never considered the chance of seeing sweat-marks on a wicker trilby before but it seems a real possibility now. Insisting on keeping it on surely means he’s hiding seriously thinning hair.

However, if he actually is as much of a prick as he appears he may be sticking with it for attention. Maybe he’s attempting to ‘peacock’ and thinks that it makes him look distinctive so girls remember him. They do, but it also handily allows them to avoid the dickhead.

Given how much he’s messing with it, however, it seems certain that he’s self-conscious. He pretty much has one hand glued to the hat. He can only be hiding a despairingly sweaty bald spot under that monstrosity. Somebody knock it off. 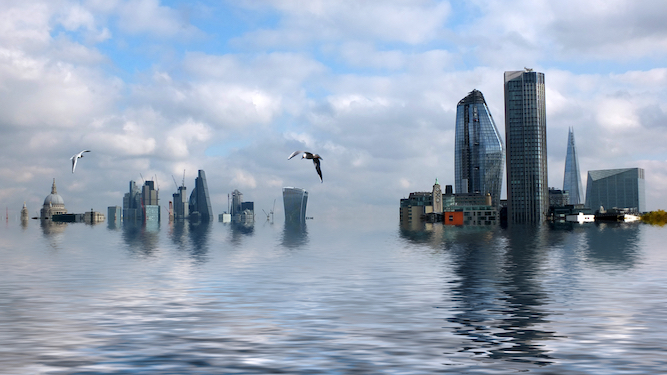 THE rest of the UK has agreed that London should be deliberately reclaimed as an aquatic habitat for the benefit of the country.

Following a trial period of heavy flooding at the weekend that has left homes, roads and Tube stations underwater, residents of Manchester, Edinburgh and Swindon agreed that it should not stop there.

Joanna Kramer of Nottingham said: “You know how there’s those sunken oil tankers that are an environmental disaster but become a haven for coral and fish and that? Same energy.

“London can’t be saved. By allowing it to slip beneath the waves we can at least preserve its architectural grandeur, which will look way better covered in coral with fish slipping in and out of Westminster than the f**king state it’s in currently.

“Its current inhabitants can either cling on to a half-life on the upper floors of the ruined Shard, hunting fish in the submerged ruins of Tate Modern, or leave. Either way they’ll be happier.

“Tourists will love cruising around the city and going for Buckingham Palace scuba-dives. The rest of Britain gets an economic boost and a fresh start. We should have done it years ago.”

Nathan Muir of Hoxton said: “I’m running a pop-up rum bar every weekend in the flooded remains of Fabric. And now it’ll be even more exclusive.”