It might not piss with rain, and other reasons it would be better to have Christmas in June

CHRISTMAS Day would be way better if we were having a barbecue in the garden. Here are some good reasons why it should be moved:

There’s always pissing rain in the UK, even at the height of summer. However, it’s less likely and Christmas would be vastly improved if you could spend the day lying on the lawn drinking a piña colada rather than watching shite telly and wanting to punch your siblings.

The food would be better

You’ve had one turkey dinner, you’ve had them all. A barbecue would revolutionise Christmas dinner by introducing classics like cheese burgers, ribs, steaks and halloumi. You could probably even roast a massive dry fowl as usual if you don’t mind it black on the outside and poisonous in the middle, which is a traditional barbecuing technique anyway.

You could get away from your family

The worst bit of Christmas is at approximately 5.30pm when the presents have been opened and the food has been eaten, but no one is drunk enough yet to pass out in a chair. Everyone is tipsy and tetchy, which would be much easier to deal with if you could hide at the bottom of the garden instead of locking yourself in the downstairs loo.

Giving someone a bike, a drone or a radio-controlled car in winter is just taking the piss as they’ll have to wait for months to be able to enjoy it. If we celebrated in June you could give granny a Super Soaker and she’d absolutely love it.

You wouldn’t have to worry about Covid

Hopefully Covid won’t still be trundling on next Christmas, but if it is then summer festivities would stop all the low-level tension and stress of the virus. You’d be ventilated and warm while opening your presents, and not spend the next week worrying you’ve murdered octogenarian Uncle George by breathing on him. 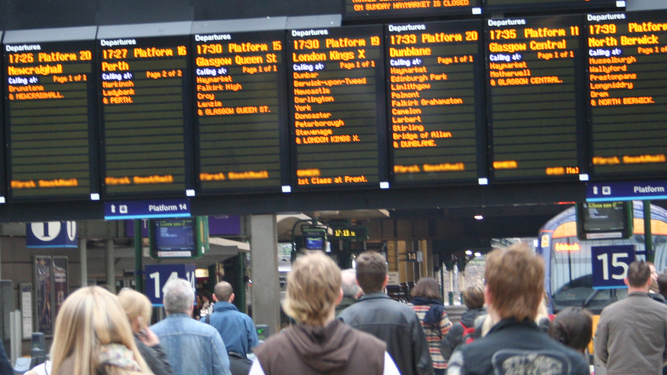 PLANNING a last-minute rail journey to spend Christmas with your folks? Don’t forget some Valium, as these panic-inducing problems are guaranteed to occur:

You’re stressed about cancellations but at the station everything’s fine. You relax and enjoy a pint or a coffee, then suddenly – mass cancellations. Your mum’s lovely dinner with all the trimmings is rapidly turning into a Dr Oetker pizza from the corner shop, eaten alone in your flat.

You get a seat with the worst twats in the world

Too many to list: a family of shrieking twats, a weird guy inappropriately trying to chat you up, thugs with a terrifying dog that could rip a xenomorph to shreds. The difference now is they’ll have blocked the aisles with bags of Christmas stuff or just baffling items, like a length of drainpipe they’ve decided to take with them right now, for some reason.

Your train moves off. You get comfy and breathe a sigh of relief. One minute later it’s announced you’ll be terminating at the next stop. No further information is available. It’s like one of those horror movies where the fateful final destination is Hell. Watford is near enough.

It’s Christmas, so why not crack open a can? Because British train toilets are broken half the time anyway, and now there are 70 people queuing to use the only functioning one. When you do get in you’ll have to do a strange little dance where you flip up the seat with your foot, so your trainers rather than hands get contaminated with piss.

After a premature stop, you have to run to another platform weighed down with gifts and a rucksack. Once there you’re told to go back to the original platform and wait, confirming your suspicions that the UK rail network is run by Jigsaw-like sadists.

You’re transferred to a train that’s already full. You try to sit on the floor of a vestibule with less space than a Viet Cong bamboo cage. It’s painfully uncomfortable. You’re forced to stand for several hours instead, a technique also popular with torturers if they don’t want to leave bruises and burn marks.

The train terminates after midnight, 15 miles from your parents’ house and all public transport has stopped. Christmas gets off to a bad start as you grovel for a lift at 2am from your deeply f**ked-off dad.