Man can't be arsed to fill his evenings

A MAN has admitted that, although his evenings are the most precious moments of his day, he just cannot be f**ked doing anything with them.

Stephen Malley spends every night from 6pm to midnight plagued by the sense that he ought to be enjoying himself while pissing about on his phone and vaping.

Malley explained: “I am aware that this is my leisure time and I should spend it doing something I really want to do. Some nights I muster up the energy for a wank.

“But largely my evenings just slip by, bringing me one step closer to the grave and six episodes closer to completing all 32 series of The Simpsons. So swings and roundabouts.

“I could play a videogame. I could read a book. I could teach myself to cook, using all that chef shit I bought at the beginning of lockdown. But mostly I find my greatest satisfaction is found in doing absolutely f**k all.”

Psychologist Dr Helen Archer said: “Free time can be a terrible burden. Some people suffer it so badly they have no option but to take up some kind of hobby, or even worse make plans.

“Mr Malley is doing the sensible thing by simply lying still and waiting for it to pass. What would be the point of doing anything else?”

A stroll around Leeds with Jacob Rees-Mogg 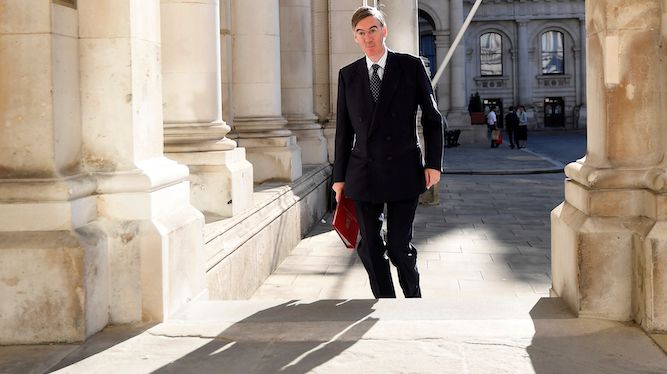 AKIN to the brave colonials who created the blessing on the Earth that was the British Empire, the Conservatives are sallying forth to open a headquarters in Leeds. Here’s my guide:

The city is home to a wealth of Victorian architecture, such as the Corn Exchange, Town Hall and Thornton’s Arcade, all built on the thriving cotton trade of the 18th century which made Britain the world’s most important mercantile nation and we’re now supposed to be ashamed of. Let me remind you our Parliament outlawed slavery.

The natives of Leeds live stunted but industrious lives, working long hours in mills and factories in terrible conditions, and if they do not currently they soon will again. All men wear cloth caps, which they doff in deference to their betters. One has the right – nay, obligation – to issue a damn good thrashing if they do not.

They do have rugger here, but it is not the gentlemanly amateur game to which one can take one’s corporate clients, but rather a savage, inferior, Northern version that participants are actually paid to play. How vulgar. Also, the ball is I believe a Saracen’s head.

My trusty first edition of Pears’ Cyclopaedia advises that September to November brings thick fog, December to February heavy snow, and March to June torrential rain. The summer weather is unknown since all gentlemen are in Europe taking the Grand Tour.

Not even the suppers endured at Eton would prepare one for the ghastly regional food. Additionally, there is the constant threat of typhoid, cholera and lead poisoning, so avoid eating locally. A good manservant should have already telegraphed Fortnum’s to arrange for weekly hampers to be sent via the Great Northern Railway.