Men still struggling to describe how they want their hair cut

MEN have admitted that no matter how many haircuts they have had, they still fall into a state of mumbling idiotic confusion when asked how they want it done.

Nathan Muir, aged 35, recently went for his sixth identical cut of the year but could only describe the style he wanted with the stumbling, halting panic of a rural simpleton who has just sighted a UFO.

He said: “I wanted something a bit cool so told the barber I wanted it kind of smooth but ruffled and he looked blank, like I was asking a mechanic to sex up my car.

“I further explained ‘You know, kind of wild but tamed? Work hard play hard?’ and he began to back away as though I was making a pass.

“I fell silent and he said ‘Short back and sides?’ to which I gratefully agreed to end the awkwardness.

“How do pop stars get their fancy haircuts? Do they have a special code?”

Men’s stylist Tom Logan said: “Men’s haircuts cannot be described in language. Even the fancy ones you see on TV are just accidents.

“I just ask ‘Like a twat or not like a twat?’ Then I just snip around and see what happens.”

Tossers announce plan to 'step back' from social media over Christmas 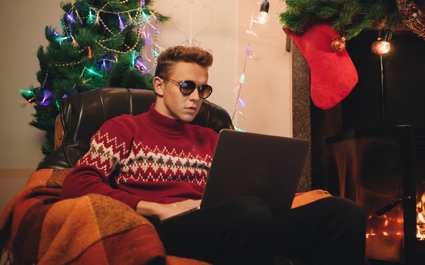 PRETENTIOUS tossers are unnecessarily announcing that they want to ‘unplug’ and ‘take a few days out’ from social media over Christmas.

The dreary, delusional tosspots believe their coming off Facebook or not putting beach pictures on Instagram is an emotionally-charged societal gamechanger equivalent to Mandela’s walk to freedom.

Professor Henry Brubaker of the Institute of Studies explained: “These are the kind of people who take forty-five minutes to say goodbye to everyone before leaving a party, or who genuinely believe you’re interested in their holiday or the dream they had last night.

Social media enthusiast Nathan Muir said: “After a year of building my ‘personal brand’ on Instagram with some amazing food pictures that have been both touching and funny, it’s time to ‘reflect and re-focus’.

“It’s partly about wanting space to embrace the moment, and partly that there is no reception at my parents’ and Dad won’t let me on the wifi since I live-streamed a tour of their house at Easter.

“I hope my seventy-three followers aren’t too disappointed.”