Nirvana, and four other band t-shirts you bought to try and seem cool

DID you spend your teens wanting to seem edgy and cool? Then you probably wore one of these band t-shirts, even if you hated the music.

Instead of growing up in a ghettoised and oppressed community in southern LA, you were raised in well-heeled, leafy Cheltenham, so NWA’s incendiary lyrics made precisely zero sense to you. However, you wanted to show that you had just as little respect for the the motherf**kers in blue uniform as Eazy-E and the rest of the gang, so you purchased a parent-bothering t-shirt in the Virgin Megastore.

You were desperate for your friends to think that you were both a fan of great music but also, like, really sensitive. You talked about hating the system and being afraid of the depth of your own emotions, but actually your greatest fear was that someone would discover the stash of Take That cassettes you kept hidden under your bed.

If put on the spot, could you have offered up a single fact about the Ramones, or even named one of their songs? No. Did that stop you from wearing a t-shirt emblazoned with their logo in the hope that cool girls would like you? Absolutely not. Did it work? Absolutely not.

As a teenager, wearing a t-shirt showing Bob Marley smoking a joint seemed like the height of edginess. Even though the single song of his you knew was ‘Jamming’, you were going to milk as much social cachet out of that t-shirt as possible. But only until your mum banned you from wearing it because she read an article in the Daily Mail about cannabis being a gateway drug.

Despite having zero knowledge of the Velvet Underground, you once saw a cool person in the year above wearing a t-shirt with the famous Warhol print on and searched one out for yourself. For all you knew, it could just as well have been some Bananas in Pyjamas merchandise, but you felt like a god nonetheless. 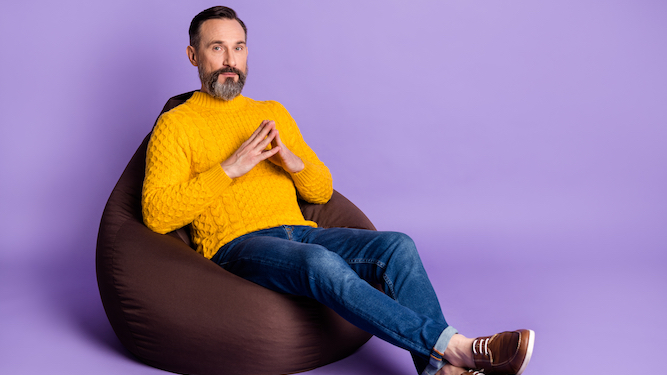 A 45-YEAR-OLD man has appealed for help after making the calamitous error of sitting on a bean bag at a friend’s house.

Mistakenly believing that his knees were still up to the challenge of standing up again in one smooth movement, Nathan Muir instead spent 10 excruciating minutes trying to extract himself from the flaccid chair.

Muir said: “What was I thinking? At my age it was an act of hubris to sit in this damn thing. Bean bags are a young man’s game.

“Probably the only way to get out of this mortifying situation is to roll over onto all fours and lever myself up using an armchair, like an old lady who’s had a fall. However this ends, it’s going to be highly humiliating.”

Muir’s wife Charlotte said: “Honestly, the state of him. It’s like looking at a beached whale. But at least a whale is graceful in the water, whereas Nathan is an awkward lump in all environments.

“I’m pretty sure I’ll look back on this as the moment where any lingering sense of attraction I felt toward my husband died. Do you think I can cite it as a legal reason for divorce?”