Pigeons and four other things kids are annoyingly obsessed with

KIDS have any number of things to entertain themselves with, but they’ll come back to the same tedious obsessions until you never want to see a T-Rex again. Here are some of them.

What is it with dinosaurs? They’re just big lizards who are all dead. However as a parent you will be expected to do a passable T-Rex impression at the drop of a hat and accept harsh criticism for confusing a Stegosaurus with a bloody Triceratops. Your kid isn’t going to be the world’s next great palaeontologist either, although it might help with pub triv when they’re 40.

Bafflingly popular and printed onto every bit of tat you can imagine, Peppa Pig is a god among small children. You might think the short five-minute episodes are a blessing, but they’re not because you’ll still have to watch them a billion times, wishing there was one where Peppa, her annoying brother, overbearing mother and fat shit of a Dad get turned into bacon sandwiches.

Before the kids came along, your bed was a refuge for sleep and sex. Fast forward a bit and your bed is no longer sacred. Now it’s a child’s social hub, handy for being comforted, a pleasant change from their bed and an excellent place to leave Dairylea Dunker crumbs. And forget about the sex.

When they’re not trying to boot them to death with a furious fire in their eyes, they’re trying to catch them. Given the choice between a brand new PlayStation and a trip to Trafalgar Square, the average four-year-old would prefer to head to Zone 1 and spend the day wildly flailing at these scraggly birds like a tiny pissed-up football hooligan.

They don’t just love boxes more than the expensive Christmas presents that came in them – they love them more than you. Call the little bastards’ bluff for once and just get them a box. 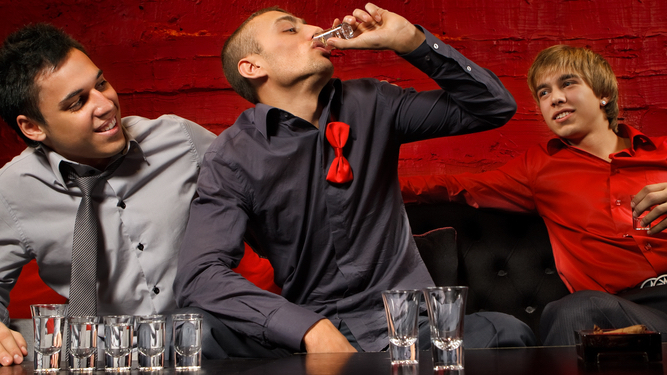 TWENTY grown men are irrationally continuing monthly payments towards a stag do they know will be f**king horrific.

Despite enthusiastically agreeing to attend a year ago, the group’s morale has dipped after months of poor planning by the best man, a WhatsApp group where every other message is a hate crime, and a long-running saga about whether to go to Magaluf.

Nathan Muir said: “My feeling is the best I can hope for is that I don’t break my collarbone diving into the shallow end of the hotel pool.

“£240 sounds like a lot, but it’ll only stretch to 5am budget flights, a nightmare two-star hotel, offensive matching t-shirts and a bit of go-karting. Although the only thing I was looking forward to was not having to drive.”

Best man Tom Booker said: “I think I’ve nailed it. 4am beers at the airport. Viking hats. Then fun in the sun, or probably not because we can only afford to go out of season.

“We’re only 100 metres from the resort’s cheapest strip club. I think the accounts of bouncers pulling knives if you don’t pay £40 for a glass of champagne are probably exaggerated.”

Booker denied the trip would be unpleasant, although he is currently planning to make the groom drink puke out of a shoe and intends to tape a hair trimmer to a broom handle so they can shave off his eyebrows from a safe social distance.