AS a pre-internet child in the 1980s it was easy to believe any rubbish your friends – or your dad – told you. Here are some nonsensical things you firmly believed in.

Approximately 12 feet in length, this lived in a local lake or river. There was no evidence for its existence, so it was clearly a wily creature, and definitely not the result of a Tomorrow’s World episode featuring a mechanical pike built for a crap British Jaws rip-off.

You can use a balloon as a condom

The source of this ‘fact’ was usually a school friend who was excited to have some sex knowledge, even if it was total bollocks. Not something you’d believe if you’d actually had sex, and this is probably just as well because you were 11.

A disused railway hut or similar was host to regular diabolical meetings of Satan worshippers. Or maybe it was just a disused hut. The local Satanists of the 1980s were not much good at it, as there are no accounts of Satan striding into a Wimpy in Nantwich for a sausage ‘bender burger’.

The cool kid in your year – the one with the Lacoste tracksuit – fingered five girls at a wild party. Or did this not happen at all and it was a typical shite teenage party with parents upstairs strictly monitoring the weak shandy consumption? Let your adult brain decide.

For example: if you spent even more time hammering away obsessively at Elite, it would unlock a secret spaceship. This never happened, in the same way that car manufacturers don’t waste time and money hiding a secret jetpack under the back seat.

Are you tough enough to be a member of the armchair SAS? 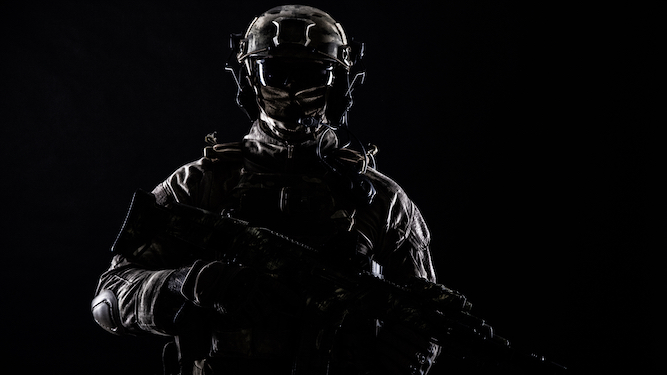 THE SAS holds an enduring fascination for civilian fantasists reading books about being hard. But could you pass the gruelling recruitment process to join their ranks?

Could you do a 25km march through the Brecon Beacons carrying a 45kg backpack and a heavy rifle?

A) No. Nor would I want to. It sounds shit.
B) No, I get winded going from the sofa to the other side of the room to put Bravo Two Zero in the DVD player.

Do you live with your parents?

A) No, my girlfriend and I have bought a flat.
B) Yes, but it doesn’t matter to me where I live. I could easily sleep in the desert, in a freezing mountain stream or under heavy mortar fire. It’s just that mum does my washing and pays my subscriptions to magazines with Combat and Survival in the title.

How would you kill a man in hand-to-hand combat?

A) I would assiduously avoid any chance of a situation where that could arise. By running off.
B) Either saw through his windpipe with a combat knife, use a mixture of boxing and martial arts, or simply push my thumbs into his brain. I practice the technique on melons.

Which of the following is not an Andy McNab novel: Crisis Four, Aggressor, Kill Mission, Deep Black?

A) Dunno. I tend to read books by people who can actually write, rather than by men in balaclavas.
B) Kill Mission, obviously. That’s not SAS slang. Do you even read the glossaries?

What is the preferred weapon of UK special forces in a battlefield scenario?

Have you ever had sex?

A) I’m no Lothario, but yes.
B) That’s a need-to-know basis sunshine, and you don’t need to f**king know? Alright? Bloody civvies.

Mostly As: You are probably not cut out to be a member of the elite armchair SAS. Watch more SAS films like Who Dares Wins.

Mostly Bs: You have passed the test! Report to your unit by ordering a pizza and sides and watching a History Channel documentary.