How to redecorate on a budget, by Carrie Symonds

WANT to spruce up the drab shoebox you sleep and shit in, but low on funds? Let prime ministerial consort Carrie Symonds explains how:

There’s nothing worse than being trapped in some stuffy old Grade I-listed Georgian mansion that doesn’t reflect who you are as a person without the funds to fix it. But instead of despairing, why not set up a dodgy charity to bankroll your project, paying for donations with political favours? Think of it as levelling up.

Win round your household

You’re the interior designer of the family, but it’s still important to get buy-in from the man in your life. Gently explain how happy it will make you to rip out the fine dining room designed by Sir John Soane in 1826 and replace it with a wet room and sauna, so he’s ready to explain it when it leaks to the press.

Be careful with money

It’s been a tough couple of years for everybody, and your partner may be on less than he’s used to for far more work. So be sparing with his salary and be innovative with public cash instead. Maybe try to track down another World War Two veteran who could raise money for something the government should really be funding itself.

Insisting on expensive designer wallpaper with 24-carat gold leaf might sound counterintuitive if you’re looking to keep costs down, but think of it as an investment. There’s a good chance it could stay up for eight years no matter what Rishi and Gove think. You deserve it.

Sometimes just moving old furniture around can create a much more welcoming environment. Try moving chairs against walls to create more space, removing fussy pelmets, firing Dominic Cummings and all his smart-arse mates, or being creative with antimacassars.

Eating one apple cancels out full day of junk food 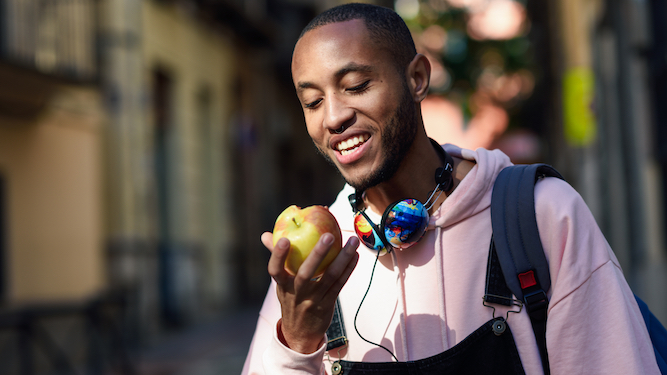 NUTRITIONISTS have agreed that consumption of a single piece of fruit means that any junk food or alcohol ingested subsequently is biologically null and void.

Foods such as Chinese takeaways, Nutella from the jar or an eight-pack of Red Stripe followed by a half a bottle of cooking sherry were previously thought unhealthy, but new research shows that eating one small banana beforehand cancels all negative effects.

Nutritionist Professor Helen Archer said: “It was astonishing to witness. I saw a man eat a pear, which he didn’t even finish, followed by an entire packet of plain chocolate Hobnobs over a bin. He actually lost weight.

“One young woman, who took the courageous decision to add some lettuce to her crisp-and-fish-finger sandwich, now has a metabolism we’ve only previously seen in Olympic athletes.

“Even just intending to have fruit, for example taking it in your bag to work, not eating it, and throwing it away that evening, unblocks arteries and reverses liver damage.

“Previously we believed that food worked on the one-grape-to-one-Malteser ratio. But now we know that a single piece of fruit makes the eater virtually invincible.”

Archer’s theme are now testing theories that a 10-minute walk to the shop, for example to buy cigarettes, could make the body immune to all disease for up to a week.