LIFE was carefree when you were young, but now you’ve drifted into the abyss of middle age all sorts of things leave you weirdly angry. Like these…

They’ve gone up before, it’s just you were too young to need to give a shit. Now you’ve got a mortgage and all manner of things you’re paying interest on. You may become quite irrational about anyone without your financial commitments, eg. ‘That homeless guy hasn’t got a loan on a Hyundai to pay off, the jammy bastard.’

In the dim and distant past this was you, but you’ve forgotten how harmless you all were. Now you think they might mug you, and cross the road or take a big, cowardly detour. In reality, there are precisely no recorded cases of a middle-aged man being shanked by a sixth-former applying to do music at Durham University.

There’s a 20-something on the train unashamedly downing a can of cheap lager, and strangely you now feel annoyed about people flaunting The Rules. In truth your middle-aged resentment is down to the fact you haven’t got the balls to flout a fairly pointless law yourself any more.

Having to wait to be served in the supermarket didn’t bother youthful you. Now you shuffle angrily from one foot to the other if some frankly evil scumbag insists on paying in two separate transactions. God help the person with a reasonable excuse for jumping the queue. You’d have them boiled in oil, only that’s too humane.

Back in the day you had the Iraq war to be angry about, but it didn’t stop you thinking about more important things like getting laid. Now you find yourself ranting about how these charlatans ended up in charge, but can’t distract yourself by trying to shag Lucy Shaw, because the odds are slightly against you hooking up with someone you’ve not seen for 28 years who didn’t fancy you anyway.

You didn’t see the point in turning the light off when you left a room in your youth. Now your bastard kids are hell-bent on turning the place into Blackpool illuminations. Frantically dash from room to room angrily flicking switches off and muttering about how they aren’t the ones paying the f**king bill. It’s basically karma for driving your own parents up the wall. 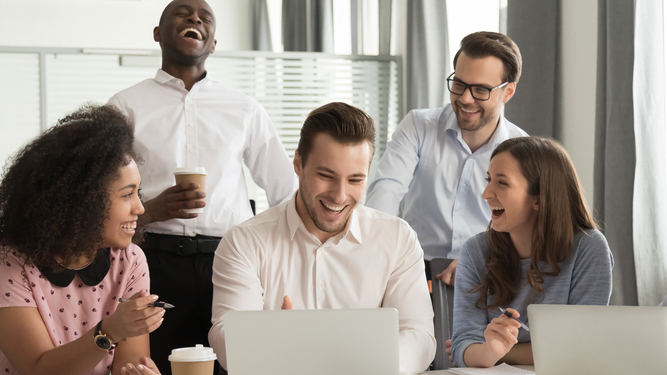 EXPLORERS have discovered the world’s first non-toxic workplace, which until now was believed to be a myth.

After following a series of arcane clues and paddling down a river in a canoe, explorers have finally found an office which is not simmering with passive-aggressive hostility or being run by heartless managers.

Expedition leader Roy Hobbs said: “I was beginning to think a non-toxic workplace was the stuff of legend, like Atlantis. But after days of hacking through the underbrush, there they were – a group of young professionals merrily sending emails and making photocopies.

“Everyone appeared motivated, and you could tell from the way nobody looked burnt-out that the company encouraged a good work-life balance. People were even using the breakout area to relax without fear of reprisal.

“When we made contact with their head of department they presented us with a homemade cake they’d bought in, and even invited us to the drinks they were having after work. It was like nobody was tainted by the pressures of modern corporate life.

“I’m worried we might have corrupted them though with our accounts of offices in the outside world. By the end of the week they’ll be bitching, glumly eating soggy tuna sandwiches at their desks and taking more holiday than they’re entitled to.”