The ability to fall asleep instantly, and other annoying as f**k bedtime habits your partner has

DOES your partner drift off instantly while you lie awake for hours? You might recognise these other irritating bedtime habits:

Perhaps your bedmate is soothed to sleep by falling rain or crashing waves? Bully for them. But you’re the one left listening to hours of watery noises once they’re asleep, desperate for a piss yet not wanting to disturb them in case they wake and press play again. Wet the bed and say it was them.

While you theoretically want your partner relaxed and stress-free, being so chilled they fall asleep instantly is taking the piss. The only way you can achieve instant slumber is after two bottles of Shiraz, and even then you wake up three hours later hungover, paranoid and knackered.

Not hot as in sexy; hot as in radiating so much ambient body heat that you want to lie on the bathroom tiles just to feel cool. Taking off your pyjamas doesn’t work either as they wake up thinking it’s an invitation for a shag while you’re more punch-them-hard-in-the-face-for-ruining-your-sleep mood.

Snoring is f**king maddening, but at least you know what it is and it’s a regular sound. If your partner makes an odd clicking sound in their throat every so often or suddenly and/or says ‘Get them out of here. They’re milk churns’ you’ll be both perplexed and pissed off. Are they having night terrors? Who gives a f**k at 3am?

The golden rule of being able to sleep in a bed with another human is that they must not move a muscle except for very quiet breathing. If you find yourself in bed with a twat thrashing like a fish on a hook who kicks you in the shin, you may wish to end your relationship immediately. Or kip on the sofa, whichever’s cheaper. 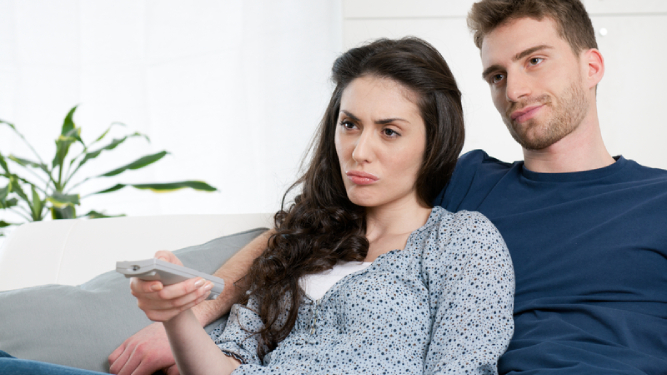 WATCHING a terrible film to the end to justify your Amazon rental or Netflix subscription? Make it hurt less with these tips:

Watch it in a ridiculous number of sittings

You should be immersed in the film’s story and cinematography, but you can only endure it in 20 minute blocks at a time, maximum. As the latest Fast & Furious launches into another interminable fight scene, it’s a morale boost to know you’ve only got two-and-a-half minutes to go before you can pause it and descale the kettle.

Any pisshead will tell you that necking copious amounts of booze makes time skip forward erratically. Just don’t be so pissed you have no recollection of what happened in the last third of the film or you’ll have to watch the f**king thing again out of a pathetic sense of obligation.

Do something else while watching

Slog through to the credits by doing something appropriately distracting. Texting friends or planning a meal will kill time during a predictable psychological thriller, while a tedious sci-fi film featuring unlikeable characters bickering endlessly in deep space might require something more involved, eg studying for a degree in medieval art history.

Slag it off on IMDb

Join the twats who think they’re professional film critics by slagging off films for bizarre reasons on IMDb user reviews, eg. ‘Excellant cinematopraphy, but Candyman should of bean White.’ You’ll feel better for getting your moronic complaints off your chest, and more importantly it’s five minutes of not watching the bloody awful film.

Alcoholics Anonymous and Narcotics Anonymous are full of people who’ve learned to make it through the next agonising hour, day or week of desperately wanting to reach for the bottle or smack. Ask them for tips on how to resist the urge to change channels. They’re bound to be sympathetic.

Force yourself to watch all the real dogshit flicks: Turkish Star Wars, Manos: The Hands of Fate, Flesh Gordon. No fast forwarding, no texting, no booze to take the edge off. Eventually even mediocre British toss like Dad’s Army will feel like Goodfellas in comparison.