DETERMINED to save money at any cost? These ways to spend less will ultimately cost you shitloads:

You wouldn’t think it, because you imagine drunk monks, but brewing is a highly skilled business. Your amateur efforts will only produce hock hock that tastes like meths or bitter so weak it takes 20 pints to feel mildly pissed. And it take so long to brew it’s like planning to go out for a quick drink in three months’ time. Your supermarket booze budget will double, to cope.

Parcel it up, pop it in the freezer and you’ll soon eat out of bins rather than suffer more of your mediocre frozen spag bol. So you’ll end up ordering takeaways, cancelling out the savings instantly. You’d have a more varied and interesting diet in prison.

Never buying a round

Saves money but eventually people will start saying things like ‘he’s got short arms and deep pockets’, or more directly ‘don’t invite that tight bastard’. Best to maintain your self-respect than to never be bought a drink ever again, and ultimately cheaper.

Like a holiday in reverse: after pitching the sodding tent, fetching water and sleeping on the ground for a week you’ll be more exhausted than a Wehrmacht soldier on the Eastern Front. Caravanning isn’t much better, due to faffing around with gas canisters and having to f**king fold things away all the time.

You can get some amazing deals online. The only problem is that you don’t know if the previous owner has been working on the laptop all day, then wanking or hammering World of Tanks until 3am, so the battery has a charge of four minutes and the motherboard is about to catch fire.

If you don’t mind putting drinks down on wobbly homemade tables or wearing unusual jumpers, go ahead. But they will be so shit and take up so much time you’d be better off just buying top-end and paying for it with a second job.

The Churchill of Playwrights: the first draft of Boris's Shakespeare biography 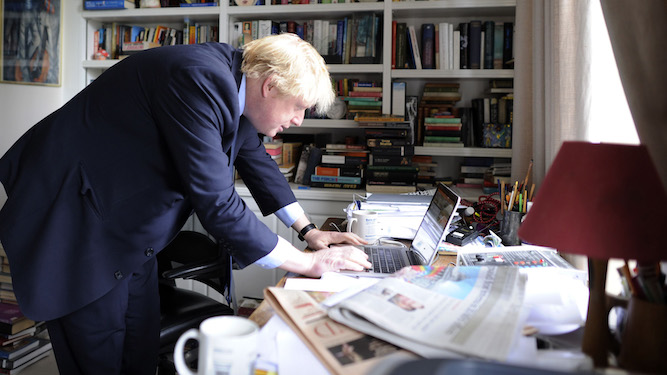 SHAKESPEARE. Bill Shakespeare. William Wordsworth Shakespeare. Am I at the wordcount yet? Blast. Have these chapter outlines and give me some money:

Chapter one: Wherefore art thou, Shakespeare?

In fair London do we set our tale, where our bard made a name for himself through his skill, charisma and flowing blonde locks. We visit the Globe, the Daily Telegraph of its day, where plays were almost as respected as mildly satirical weekly columns are in our more enlightened age.

One thing no Shakespeare expert can deny is that, like all great Englishmen, he loved to put it about. Ladies, fair maidens and the occasional wench, Shakespeare went through them left right and centre, and was well respected for it. Music was the food of love, and by music I mean a good solid rogering, and he did play on.

Chapter Three: The Many Wokes of Windsor

Ivory tower academics like to sneer at the Bard of Avon, saying that he was a bit racist here or a pinch sexist there. But the lesson old Shakey teaches is that no matter what you say, where it is published or who claims to have recordings of you saying it on his blog, time will make fools of them all.

Chapter Four: A Plague on Both your Houses

In the face of contagious disease and ruin, Shakespeare embraced the Blitz spirit and ploughed on regardless. Like any great man, he showed everyone that the best way to deal with a pandemic is to never mention it in anything you write or say and pretend like it never happened.

Chapter Five: To be or not to be Shakespeare?

That is the question. One can, however, safely say that Shakespeare was. With his actors his…centurions and Hamlet his Brexit, Shakespeare absolutely was a man of…the Union Jack. Truly he was the Churchill of playwrights. Big type, massive margins and that’s a book. Done.