RAISING a child is packed with significant moments which nobody except the parents gives a shit about. Here are the milestones you’ll idly scroll past on social media:

The ultrasound scan of a baby in the womb, which is a grim harbinger of the mundanity your timeline is about to be inundated with.

Baby’s first night at home, which is just a photo of a wrinkly baby nestled in a duvet. It will get more likes than the entire history of your statuses combined.

One month ‘birthday’. No, you shouldn’t expect to be amazed by this minor achievement.

The first time the baby slept through the night. A thrilling moment for the parents, so tedious for everyone else that they’ll start nodding off.

Meeting the grandparents. Two boring extremes of the age spectrum come together in a photo that’s somehow more dull than the sum of its parts.

Six months ‘birthday’. Yep, parents really mine this angle for all it’s worth. And it works every time because old relatives on Facebook love this shit.

Their reactions to seeing things for the first time. Parents know this is a ‘like’ goldmine so will exploit it accordingly. Expect to see photos of a baby being blown away by telegraph poles, salt bins and manhole covers.

A particularly messy mealtime. Not shared will be the desperate pleas of the parents to just eat the f**king food instead of throwing it on the floor.

Eight months ‘birthday’. This is taking the piss now.

When they learn to walk. An impressive feat for a toddler, but so commonplace in adulthood that the novelty has long since worn off.

First day of school. The kid visibly doesn’t want their awkward photo taken, and we don’t want to look at it either. Everyone’s a loser here.

Smiling, and other ways wankers will convince themselves you fancy them 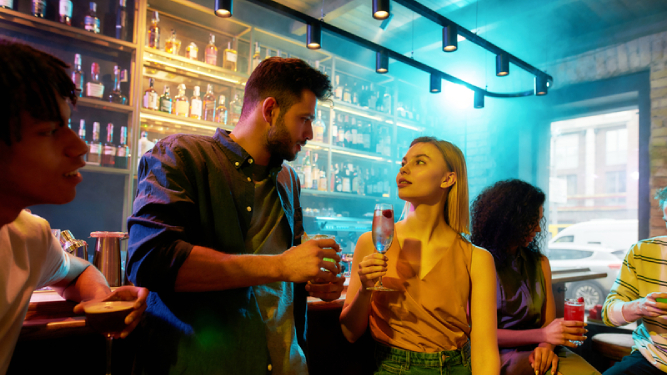 DICKHEADS think everyone wants to sleep with them. Think twice before acknowledging their existence with these highly flirtatious actions:

It’s universally acknowledged that any question, even one as simple as ‘y’alright?’, means you’re desperate to know the inner workings of a person’s beautiful soul. And you had better believe they will gift you with a long – some might say unasked-for – answer.

‘Good work today, Steve’ isn’t professional. ‘Thanks for that, Gary’ isn’t polite. They’re blatant declarations that you’re enamoured with someone and want to settle down with them someday. What other reasons could you possibly have for saying these things?

Surely you can’t be smiling just because you’re happy? No, twats will convince themselves that it’s their mere presence which has turned your frown upside down. Too bad they never think they’re the reason you’re rolling your eyes and furiously flipping them off.

People are more adept than you might think at picking up on body language. Arseholes, however, are pros at reading all the signs wrongly. Look at them in the eyes while talking to them, or even just briefly catch their gaze on the tube, and they’ll be convinced you want to get into their pants.

It’s naive to think that avoiding all of these behaviours will take gobshites down a peg or two. As all smarmy f**kers know, ignoring someone entirely is the most obvious way to communicate that you hear wedding bells whenever you see them.