Thinking pubs are too loud, and other real milestones of ageing

WHILE society might encourage you to mark the passing of time with birthdays, here are the real signs that you’re knocking on in years.

One morning, perhaps in your 40s, you will wake up, heave yourself out of bed and hear a strange creaking. Don’t be alarmed. That’s simply the sound your joints will make, now that they’ve worn through their cartilage, any time you move until the day you die.

You used to complain that quiet pubs were ‘boring’. Then the prospect of going to a nightclub became terrifying, and like a little frightened owl you wanted to retreat from all the loud noises. Now you can only tolerate dull, quiet pubs, and the mates you spent years clubbing with are pretty tedious to talk to.

Going to the bathroom used to be simple. A wee would be a swift, gushing affair. You could sit on the toilet without ‘pushing’ and worrying that you’re doing long-lasting damage to your arsehole. Soon you may even reach the milestone of your first haemorrhoid.

Remember a time when you used to be able to sit down and stand up without emitting a series of low, sinister grunts? No? That’s probably because your memory is going too.

No longer being asked for ID

In your early 20s you found it almost offensive if someone questioned your adulthood by asking for your ID. Cherish those days, because now some gormless teen working in Tesco asking for your ID as you buy some wine with your microwave curry will be the highlight of your week.

Getting a sensible chair

When you’re young you’re able to sit for hours on end in beanbags and other seats that offer piss-poor back support. Then, before you know it, you’re in your 30s and googling ‘lumbar support’ and spending hundreds of pounds on elaborate ergonomic chairs to try repair all the damage you’ve done to your spine. 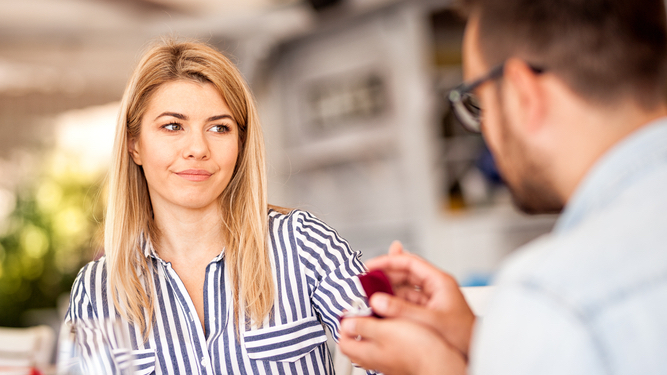 A WOMAN going on a romantic weekend with her boyfriend is praying he is not planning to ask her to marry him.

Nikki Hollis was surprised when Tom Booker announced he had booked a two-night break at a posh country spa hotel at short notice, but was soon gripped with dread at his possible motive.

Hollis said: “I’ve always wanted to go on one of these spa pamper weekends. He’s even arranged dinner at a very expensive restaurant, so for a second I was really excited.

“But then it struck me he might be planning to propose, which would be a disaster. I’m bored shitless with him to be honest, and was going to dump him until this happened.

“I’m probably just being paranoid so should really just go and enjoy myself. i can always chuck him a respectable couple of weeks afterwards.”

Booker said: “Nikki’s got beauty treatments in the afternoon, then in the evening I’ve paid for a string quartet to serenade us after dessert. Then I’ll force her into making a massive life decision by pulling out the engagement ring.

“I’ve planned the whole trip with military precision, so literally nothing can go wrong with this.”