A WOMAN who spilt a full pint of milk onto carpet has set fire to her own home rather than deal with cleaning up the f**king mess.

Carolyn Ryan dropped the glass of semi-skimmed milk, briefly considered the lengthy process of wiping, soaking, and scrubbing that would be necessary, and got a bottle of barbecue lighter and a box of matches instead.

She explained: “It went everywhere. All over the floor, up the walls, behind the radiator, under the settee, f**king everywhere.

“I considered using a whole roll of kitchen roll just to soak it up, then the hands-and-knees scrubbing, then using bicarbonate of bloody soda or whatever to stop it stinking on hot days in five years’ time. And I couldn’t.

“So I just doused the room in lighter fluid, threw in a lit match and walked away. No more mess. No more being stuck with the stench of stale milk for the rest of my life.

“It’s like the time I dropped a whole jar of pasta sauce, walked out, closed the door behind me and put my house on the market. There was no way I was dealing with that, so I said goodbye to my partner and kids and started a new life in Spain.

“I’ve been living in a cardboard box since the fire, but no regrets. Plus, if I spill anything in here, I just go and grab myself a new home from round the back of Aldi.”

'Get f**ked, baldy': a transcript of the Harry-William phone call 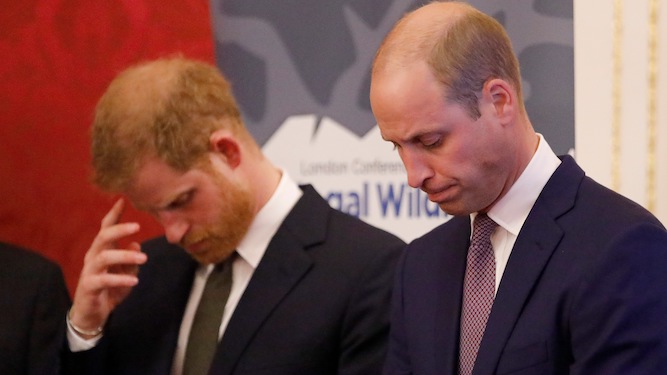 A PHONE call to patch up differences between Prince William and Prince Harry went badly. The Daily Mash has the transcript:

KENSINGTON PALACE: Hello? Is that Harry?

KP: Up your bollocks, ginger. I’m phoning because Granny’s made me.

SB: Yeah? Any idea how pathetic that sounds?

KP: Anyway we’re meant to be having peace talks. As in you give the rest of us a bit of peace by shutting your bird the f**k up.

SB: Oh piss off. She’s American, they never shut up. Anyway, why should she? You and Kate didn’t shut up sending your little pals to the newspapers when you didn’t like the plans for Frogmore Cottage.

KP: Hot tubs are common. Look, you’re making us all look bad and dragging the good name of the Royal family through the mud, and it’s got to –

SB: Me dragging it through the mud? Have you met Uncle Andrew? And his daughters get to be bloody Princesses.

KP: We can remove you from the line of succession. I warn you.

SB: Right. So I’ll never be theoretically considered for the job Dad’s been waiting to do his whole life, and he’s 72. Big loss. Huge.

KP: And Granddad says you haven’t called him.

SB: Last time I spoke to Granddad I had to consult a dictionary from the 1930s to check that the archaic phrases he used were, as I suspected, hugely offensive. My suspicions were confirmed.

KP: So what, you’re just going to talk to whichever Yank TV host you fancy?

SB: Ah, it’s the wife, she’s all Hollywood. Genuinely it’s nice out here though. Doesn’t piss it down all the time. You should visit.

KP: Yeah, fat chance with Kate on the warpath. She’s livid. And now Meghan’s gone she’s taking it out on Pippa again. What’s this Netflix deal about, then?

SB: Honestly f**k knows, mate. Wellbeing or some shit. We needed the money. Anyway, no hard feelings, meet up for a grouse shoot on the 12th?

KP: Yeah alright. Tell the press we’ve still fallen out though. Distracts them from what Edward’s getting up to.

KP: Nice one. Future king out.