'You'll regret it': Things parents say to non-parents that are really about themselves

CHILD-FREE people are often told they’ll regret their choice by parents who seem to regret theirs. Here are the things they say that actually apply to them.

‘You’ll regret not having kids’

People who are stressed, exhausted, poor and surviving off the half-chewed leftovers from their kids’ plates because they haven’t got time to cook a meal love telling those who don’t want kids they’ll regret it. It’s not too much of a stretch to suspect they’re talking about themselves.

‘Who will look after you when you’re old?’

Whether you have children or not, the odds are you’ll end up miserable and lonely in an old people’s home, and there’s no guarantee your kids will be arsed to visit you. Also we’ve moved on from subsistence farming, so you won’t be dependent on your offspring stockpiling potatoes to survive the winter. Unless something goes horribly wrong with pensions.

Are childless people really the selfish ones? Or is it those who pump out miniature versions of themselves to absorb the earth’s dwindling resources? And that’s before you mention other parental selfishness, such as wanting to bask in the glory of them being a pro footballer or a doctor, until the pressure makes them drop out and become a hippy traveller called ‘Leaf’.

A tad extreme, and a weird definition of ‘happiness’: constant noise, loss of freedom, endless expense and a lifetime of worry that you’ve produced an emotionally unstable mess of a human who’ll will be living in your house when they’re 42. Childless people, however, can drink lager in the bath instead of going to parents’ evening. That’s true happiness.

‘Your relationship won’t go the distance’

Some desperate people claim children are the glue that holds a relationship together for a lifetime, but when you see two frazzled parents in Tesco bickering over whether a kid can have a Freddo, the reverse is clearly true. A cat is much easier and they don’t have a tantrum in the frozen aisle. As far as you know. 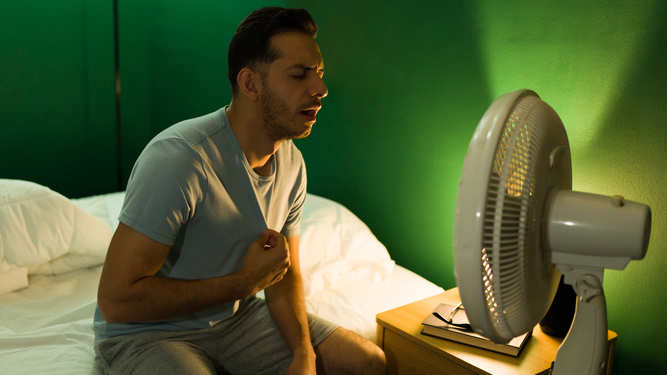 STRUGGLING to fall asleep in unbearable temperatures? Get a whole nine minutes of kip by following this practical advice.

Don’t use a duvet

Are you crazy? These big weighted bags filled with down or cotton are designed to trap your body heat, so angrily kick them onto the floor. That’ll help. If you have to cover your body, use something really light and thin like a sheet of one-atom-thick Graphene or, failing that, a big piece of paper.

During the colder months you think nothing of taking a hot water bottle to bed, so why not apply the same logic during a heatwave? Hugging an ice cube tray will bring your temperature right down and allow you to grab some much-needed slumber. You’ll just have to accept them melting and making you wake in a panic thinking you’ve pissed yourself.

Not the sexy kind of groans your partner never seems to make during your clumsy fumbling, but the groans of suffering you hear from an intensive care ward. Letting out an endless chorus of moans will wear you out in a matter of hours, leaving you exhausted enough to drift off just as the sun starts streaming through your window.

Ask your partner how their day’s been

They’ll be wary at first because you never do this, but they’ll soon open up. All you have to do is nod and go ‘uh-huh’ every now and then to keep the momentum going, and before you know it you’ll be so bored you’re asleep. Enjoy it while you can because they’ll wake you up by kicking you in the shins before resuming their boring monologue.

The country, not the supermarket, although they do have big freezers which would probably be pleasant to sleep in if you didn’t suffocate. The UK, like most of the continent, is now uninhabitable in summer, so why not flee to the country with the coolest sounding name? As well escaping the heat you’ll be leaving a broken political system behind. It’s a win-win.