POLICE are exploring the possibility that Lord Lucan, who disappeared in 1974 following the murder of his children’s nanny, may simply be on an extended gap year.

Investigators believe the aristocrat may have simply taken some ‘time out’ and is currently sitting round a campfire on a beach in South-east Asia reading Zen & The Art of Motorcycle Maintenance while wearing a tie-dyed pork pie hat with mirrors sewn into it.

Criminal profiler Roy Hobbs said: “This new theory posits that Lucan may have fled the country for spiritual rather than murder reasons.

“His diary describes a ‘lack of freedom to express myself creatively’ and a ‘total Western downer’ shortly before his disappearance.

Hobbs continued: “Lucan will probably have looked around a lot of temples, taken pictures of misshapen local dogs and played long table football sessions with a group of Israeli stoners.

“If this is correct, we’d have to start looking for him in such locations as Angkor Wat, Malaysia, and of course, Thailand’s Phuket.”

He continued: “Lucan would have changed his appearance – his trademark moustache has probably been replaced by a goatee beard or even a soul patch, and he’s probably got a few piercings or a tattoo that he doesn’t realise says ‘I like cock’ in Sanskrit.

“He may well be carrying a musical instrument – I use the term loosely – such as a didgeridoo or bongo drums.

“This only adds to the urgency with which this man must be caught”. 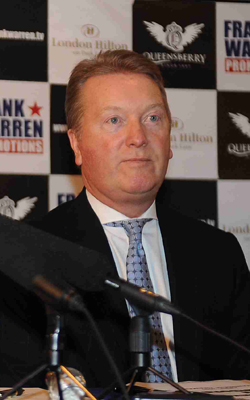 FRANK Warren is to charge home audiences £12 for all future boxing interviews, he has confirmed.

As the Chisora/Haye brawl rumbles on, with the two fighters currently swinging furniture on the German/Czech border, boxing uber-spiv Warren has declared that all future interviews with confused-sounding hulks will be held in auditoriums full of drunk gangsters.

Warren said: “People got to see more decent punches  thrown last night than in the last ten British boxers’ fights combined, without me making any money out of it. That’s going to change.

“If the future of British boxing doesn’t include anybody that can stay upright in a ring for longer than three minutes, then at least we can train some really world-class chair-throwers.”

A specially-built ‘combat press centre’ is being constructed in Warren’s Basildon-based boxing factory to ensure that every slight against an opponent’s parentage and every clumsy scuffle can be fully appreciated by a paying crowd.

The centre will accommodate two full entourages for boxers, as well as up to eighty press photographers to take photos of the ensuing melee so people with no interest in boxing can have an opinion on whether they should be allowed to call each other pussies while in a mutual headlock.

ESPN and Sky have declined the broadcast rights for future events but the BBC is dropping its lacrosse coverage to pay for the next twelve months’ worth of bulky men in suits flailing at each other.

Warren said: “All we need is a new term for this part of the sport. We can hardly it the ‘sweet science’ or ‘the noble art’ but I think ‘glorious gobshitery’ might fit the bill.”