Old racist in Stoke interviewed by media for 178th time

A PENSIONER with strong but largely misinformed views about Brexit is to be interviewed by the media yet again, for some reason.

Despite having no particular expertise relating to Brexit, Norman Steele has been interviewed by the BBC, ITN, Guardian and others because he is always easy to find in the Black Wolf pub.

Steele, 74, who is likely to be £60 a week worse of and will die without six types of daily medication, is also favoured for his snappy quotes such as ‘Bring back rationing, it’ll do us all good’.

BBC News reporter Martin Bishop said: “We’d interview the 17 million or so people who voted Remain but they’re not ‘real’ in the authentic way Norman is. Also they’re at work.

“Norman draws some fascinating parallels between Brexit and World War 2 which I find refreshing and insightful. For a foetus, he played an amazing role in winning the war.

“He makes me feel very guilty and metropolitan. His is the authentic voice of elderly, white, disaffected, bigoted, bloodyminded pig-ignorance and we should hear it as often as possible.” 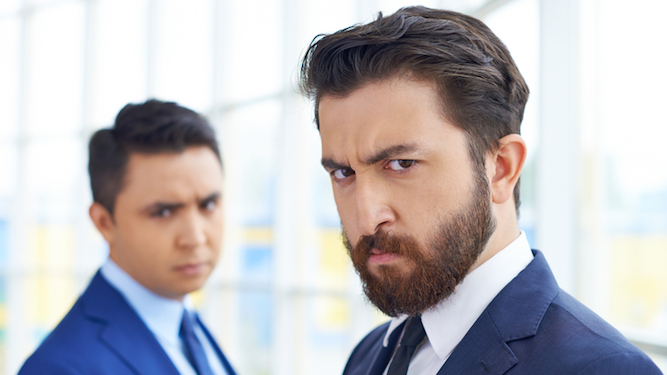 GETTING revenge on co-workers for some incident in the past is the main thing people working in offices think about.

Research shows most employees spend at least an hour a day fantasising about settling grudges, often involving a verbal or physical confrontation that is unlikely to ever happen.

Sales executive Tom Booker said: “We had an important meeting this morning, but I was mainly thinking about how that prick Jeff made me look a bit stupid a year ago.

“I was so immersed in it that when my boss asked ‘Are you OK to drive up to Altrincham on Friday, Tom?’ I blurted out ‘That fucker’s got it coming. You ain’t seen the last of me, matey.’

“Everyone looked at me a bit funny but I can guarantee at least three other people in the room were thinking the same thing.”

Administrator Emma Bradford said: “I like to spend an hour or two each day in the staff kitchen robotically stirring my coffee and planning how to humiliate that cow Rachel.

“I’m going to get her. I’m not sure how, but I will. Maybe I can get promoted and make her life hell. Or I could get a really amazing job so she’ll be sick with jealousy until she dies.

“Realistically that’s not going to happen, though. Looks like I’ll just have to make her a lapsang souchong with wee in it.”