Patrick Bateman tells George Osborne to tone it down a bit

GEORGE Osborne’s investment banker friend Patrick Bateman has told him saying he wants Theresa May ‘chopped up in bags in my freezer’ is a bit creepy.

Bateman, who bonded with Osborne after hours at a New York finance summit in the 1990s, has advised the former chancellor to tone down his violent rhetoric.

He continued: “I met George over Japanese bluefish tuna at Le Bernardin. He was wearing a black Dries van Noten suit over a blush pink Paul Smith shirt with cuffs flecked in dried blood.

“We share similar tastes in music, technical gear, relaxation, hardbodies, recreational extremes and the elimination of certain types of people, but this is not professional.

“I know how he feels about Theresa. I’ve felt that way about a lot of women. But either keep it to yourself or scream it into the ear of an uncomprehending suit in a nightclub while INXS’s New Sensation is playing at deafening volume.

Bateman added: “I’m coming over next month. We’ve got reservations at Alain Ducasse at the Dorchester. Afterwards we’ll do something.”

Middle-class family's showing off enters 'getting some chickens' phase 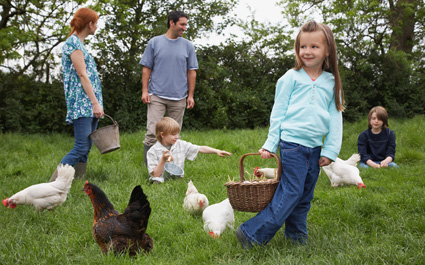 A MIDDLE-CLASS family has got some chickens as part of their ongoing commitment to showing off.

Affluent conformists Tom and Louise Booker already have a tasteful house in the country, where they work from home doing some morally dubious ‘consultancy’ work that involves fleecing local authorities.

Having recently bought a large white Audi and sent their favourite child to private school, they have now purchased some chickens they don’t really want.

Louise Booker said: “It’s so amazing having the chickens, our youngest Rudy adores them and has a special name for the big one that I can’t remember right now but it’s very lovely.

“And you get delicious ethical eggs, sometimes half a dozen eggs a month which is just brilliant really when all you have to do is feed and generally deal with a load of chickens every single day.”

Neighbour Roy Hobbs said: “I give it a fortnight before the fox gets the chickens. And six months before the next recession gets the Bookers’ ‘shite country magazine’ lifestyle.”