Police Threaten To Stop Shooting Brazilians In The Face

POLICE are threatening an immediate halt to all Brazilian face-shootings as part of their ongoing pay row with the government.

Tom Logan, chairman of the Police Federation, said his members were already operating a 'shoot-to-rule' and would only pump bullets into Brazilians, electricians, or both, during normal shift hours.

He said: "We don’t care if the guy's pinned in his seat and the gun's in his face. If it's clocking-off time, we down tools and that fanatical Brazilian can either blow himself up or continue his journey to work. Whatever."

"Without the police this country would be swarming with Brazilian electricians, undermining our values and that.

"People might think we sit around on our arses all day, sending squad cars out for fish and chips and ignoring your desperate pleas to stop the local kids urinating on your car. But we don't. We shoot olive-skinned electricians. In the face."

He warned that an all-out strike would also leave young black men free to drive their own cars and that second-round FA Cup matches would be forced to go-ahead without an intimidating police presence.

Logan added: "And who is going to stop you for having a faulty rear brake light and then lean in your window and make you feel small in front of your wife, while his partner leans in the other window, fondles his truncheon and winks at your missus?" 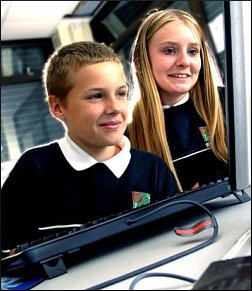 THE government has unveiled its 10 year vision for Britain's children with a pledge that childhood will now begin at birth.

In a keynote Commons statement child minister Ed Balls outlined his plan to make British children the most childish in the world.

Balls told MPs: "Let's get back to basics. A traditional British childhood must begin at the point of womb evacuation and not a minute later.

"From that moment on it's strictly Swallows and Amazons with perhaps a hint of Railway Children. The era of Byker Grove is at an end."

Balls also wants primary schools in England and Wales to provide services for adults including an off-licence, a second hand car showroom and a massage suite.

The government's 10 point plan for childhood:

Next week the government is expected to outline its 17-point plan for adulthood.