Couple's date in diary for sex getting dangerously close

A BUSY couple who put a date in their diary to ensure they have sex are becoming increasingly panicked as it draws closer.

Francesca Johnson and Martin Bishop, who read an article about ‘scheduling intimacy’, are both secretly hoping something will terrible will happen that allows them to get out of it.

Johnson said: “I think I still fancy Martin but all the rigmarole of taking my clothes off and doing it feels a bit pointless when we could be watching an episode of Succession.

“I suppose that’s why we decided to put a date in the diary. It seemed like a good idea at the time but now it’s looming over us like an appointment for a root canal filling.

“So I’m hoping that he’ll have an accident or something. Nothing too serious, just a broken leg that will need a plaster cast and make sex too awkward to bother with for several months.

“I think he’s hoping the same thing happens to me. He was standing suspiciously close behind me on the stairs this morning.”

Are you a 'radicalised Remainer' or do you just think Farage is a tw*t? 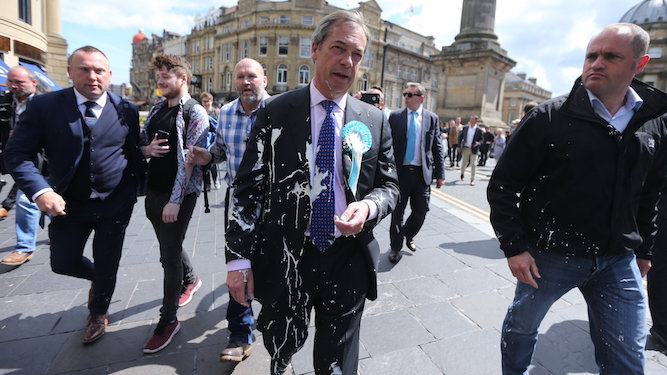 HAS voting to remain in the EU somehow turned you into a traitorous, UK-hating fundamentalist, or do you just hate Nigel Farage? Here’s how to tell.

You buy a milkshake. Do you:

A) Drink it. It cost the best part of a fiver so you aren’t going to waste it.

B) Throw it at a passing politician. Followed by a petrol bomb, because that’s obviously the next logical step for a radicalised Remainer.

B) Burn down the polling station because you hate democracy and want to steal the UK’s precious sovereignty.

You meet the Queen. Do you:

B) Steal her crown, poke her in the eye and piss on her corgi for good measure, because you’re just a massive treasonous bastard who hates this country and everything it stands for.

You read about businesses relocating from the UK because of Brexit. Do you:

A) Mildly express concern about the economy and people’s jobs.

B) Put on your ‘Project Fear’ balaclava and creep out at night to push scaremongering leaflets through people’s letterboxes and frighten old people, who you hate because they all voted for Brexit.

Mostly As: You think Nigel Farage is a tw*t.

Mostly Bs: You are a radicalised Remainer who lives to frustrate the Will of the People and see your fellow citizens enslaved. Luckily you are made up.