Have your partner's quirky traits crossed the line to become f**king unbearable?

WHICH of your partner’s once adorable quirks have developed into unacceptable character flaws? Find out with our quiz:

Their distinctive nasal laugh that you initially found cute has become profoundly grating. Do you:

A) Accept that it’s inherent to them, and remember to love them for it.

B) Broach the possibility of nasal surgery to make the tenor of their laugh more appealing.

At first you found their forgetfulness funny as it simply showed their mind was on other things. Now do you:

A) Continue to be forgiving of this, as you almost certainly possess some traits that equally infuriate them.

B) Feel annoyed that the rest of your life will be littered with petty arguments about how they’ve left the lid off the f***Ing butter again.

In the early days you chatted giddily through movies together. Now their insistence on talking during every film has become an issue. Do you:

A) Remind yourself that a harmonious relationship is far more important than the plot of yet another Avengers movie.

B) Inform them that if they insist on talking to you while at the cinema they will have to buy you a ticket to see the same movie again, alone, while they look after the children.

Their ability to quickly fall asleep at first gave you a chance to look lovingly into their dreaming face but now makes you inexplicably angry. Do you:

A) Understand that everyone’s body is different and they simply need more sleep.

B) Confront them by saying that they either have some mild form of narcolepsy which needs medical attention, or they’ve been pretending to be asleep to get out of doing chores in the evening.

In the beginning you found the way they would spontaneously burst into song endearing, despite their lack of ability. Now do you:

A) Accept that they aren’t trying to annoy you, singing is simply something that gives them joy.

B) Threaten to leave them if they wail even one more bar of sodding Titanium.

Mostly As: While your partner has flaws, you know that no one is perfect and you try to look past their minor shortcomings for the sake of not having to break up with them and go through the faff of moving house.

Mostly Bs: You are an intolerant bellend and it is clear you are the problem in this relationship. They should be splitting up with you.

It's just a cold, says colleague coughing all over the office 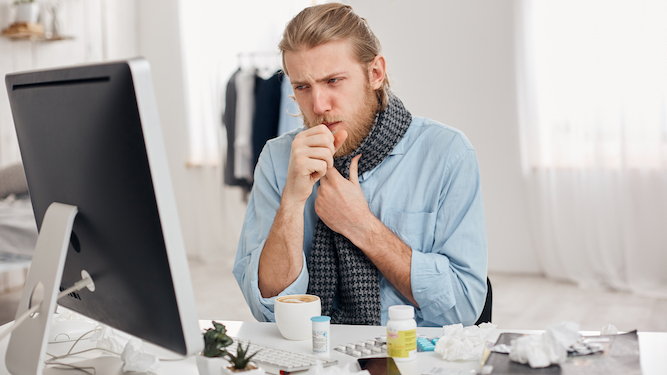 A MAN says his colleagues do not need to worry about him coughing in their faces, because it is just a cold and not Covid.

Julian Cook was surprised when people started backing away from him after finding out he was ill, and yet had come to work not wearing a mask and started blowing his nose over the photocopier.

Cook said: “They were treating me like I had the plague or something. I know there has just been a two-year long pandemic that has destroyed the health and livelihoods of millions but, honestly, chill out everyone.

“I won’t wear a mask because they only stop you spreading Covid, but a cold’s not Covid. And yes, that is a scientific fact. I watched a video about it on Facebook.”

Joseph Turner, who works with Mr Cook and caught his cold said: “The guy is an idiot. In the old days you were expected to still turn up at work if you were half dead with flu.

“Now you can get a week off if you’ve got a little sniffle and a picture of a positive lateral flow test that your cousin Dave sent you. It’s brilliant.”