A WOMAN on a first date excused herself by implying she was going to fix her make-up, when actually she was heading for a dump.

Lucy Parry subtly made Jack Browne think she was going to look in the mirror, primp her hair and spray some nice scents around rather than wreak havoc on the toilet of an Indian restaurant.

Parry commented: “I simply said ‘I’ll just freshen up’ and pointed vaguely at my face, which instantly made Jack think I was going to touch up my eyeliner rather than noisily excrete the lamb bhuna which had gone right through me.

“Guys assume that ‘freshening up’ involves some mysterious but pleasant lady business rather than any bodily functions. It also sounds better than ‘Why did you take me to a curry house and cause my IBS to flare up on a first date?’

“It’s the ideal get out of jail free card. You can be two minutes or, like I was, a solid 20, and they’ll never ask any questions. It’s like a Jedi mind trick for people who think women don’t poo.”

Jack Browne said: “She was ages fixing her make up and looked far worse when she came back.”

England vs Ukraine: the drinking game 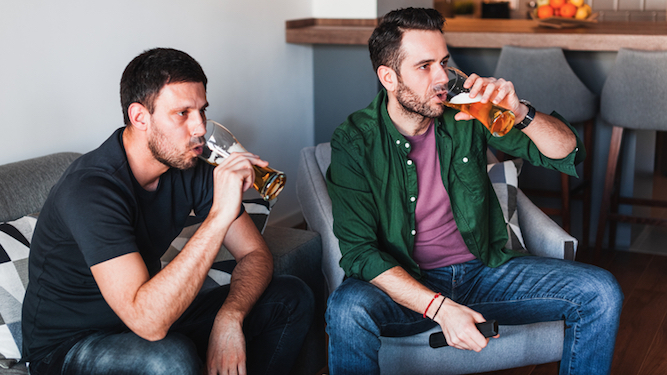 THE match tonight needs a drinking game, and it can’t be based on goals because England have only scored four in three weeks. Use these rules:

Neither players nor crowd sing the national anthem: sip beer
It kicks off slowly and nothing exciting happens: finish the beer
Nothing continues to happen: sip the next beer
England win a corner and Jermaine Jenas acts like it’s a penalty: finish the beer
Close-up of fat bloke in crowd looking worried: swig beer
Half-time arrives without any goals: go out for a fag and consider switching to vodka
England score: open the prosecco and pour everyone a glass
Ukraine immediately equalise: swig prosecco straight from the bottle while staring affronted at the screen
You miss a goal because you were in the kitchen getting a beer: chug bottle of beer
Grealish comes on: finish whatever drinks are at hand out of sheer spontaneous relief
England win a penalty: miss your mouth with whatever you’re drinking as Kane misses the goal
Guy Mowbray says ‘Of course, it’s too early to think about the next game’ and proceeds to do just that: disgusted swig as you try not to imagine it
It goes to extra time: send someone to the Co-op to get more beer
Harry Maguire goes right in on some Ukrainian player: sip port while murmuring ‘a forthright challenge, but well within the law’
Mykola Matviyenko goes right in on England’s child-saving hero Marcus Rashford: drain your port in outrage while shouting obscenities
An England player gets sent off: do a double whiskey
A Ukrainian player gets sent off: do a double whiskey, because we rarely tend to profit from these situations
Ten minutes of extra time left and it’s going to be penalties: open the absinthe and apply liberally
Penalty shootout: tequila shot for every single one
The next morning: wake up downstairs with no clear idea who won