16 aggravating things your mum will say during tonight's England game

TONIGHT’S game will be repeatedly interrupted by your mother, who last watched football in July 2018. This is what she’ll ask:

Why are they kneeling? Black Lives Matter? But why are they still doing that now the policeman’s gone to prison?

I preferred it when Gareth Southgate used to wear the waistcoat. He looked smart. My dad used to wear a three-piece suit when he was working for the old Electricity Board, and that’s how we could afford the Morris Traveller.

It’s a shame it’s only the Ukraine. You’d think in a big match like this we could play against someone more prestigious.

Am I right in remembering if it’s the away end the goal counts double?

I’ll tell you who I used to like. Derek Parkin. You must know him, big-nosed fella, used to play for Wolves. I met him in a hotel once near Loch Ness and he was ever so polite. A real gentleman. Ooh, was that a goal?

I don’t know why they bother with offside. They should abolish it for both teams at the same time so it’s fair.

That story about Gary Lineker’s nonsense. You know the one. Having that ess-aitch-eye-tea on the pitch. Well he never did. He made it up to seem more like a rock wildman. And he should keep his nose out of politics.

They never had the Ukraine back when I remember. Now they’re in this and Eurovision. They shouldn’t be allowed to make countries up.

All these tattoos. They just look like fairground workers to me. I told you when you got yours you’d regret it.

They all used to have a big bath together after the game, I liked that, and they’d have a drink in it and hold the cup. Now they’re too cool and have ice baths instead.

Is this on much longer? Only I’ve recorded The Chase.

If he can’t save a penalty then he’s not much of a goalkeeper if you ask me. It’s not like he does anything else.

Oooh! What a shame. Are we out of it now then, or do we get another chance?

Never mind, love. Any chance of a cup of tea?

How to make going to the seaside less working-class 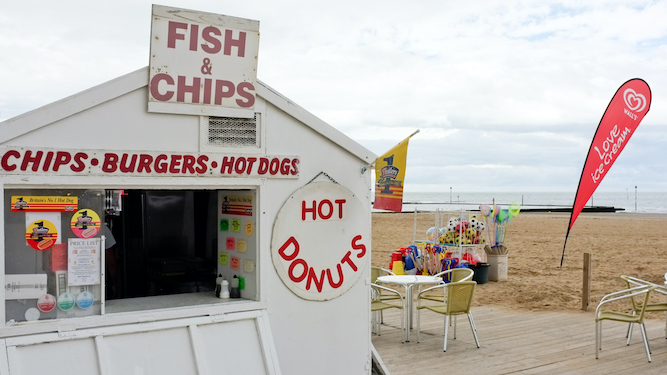 FANCY the seaside but fear being surrounded by common plebs? Middle-class father Nathan Muir explains how to avoid them:

It’s fine to sit on the beach or eat candyfloss as long as you smile ruefully about how predictable it is. Just don’t admit to yourself that you really enjoyed shooting a BB gun on the pier and feel incredibly proud and macho after winning a cheap, unlicensed Peppa Pig.

The lower classes and their spawn will be making pathetic little sandcastles or just digging holes. However you should make an elaborate sand sculpture, even if your kids are bored shitless by it. The more pretentious the better, eg a scale model of the Vatican, or a disquieting rendering of novelist Zadie Smith.

The seaside is fun because it’s a bit shit: you can play miniature golf, splash around near a sewage outlet pipe and eat greasy doughnuts. Eschew these pleasures and go to a resort with cultural stuff, eg Bournemouth’s Victorian art gallery or Tate St Ives. Less fun than getting pissed on lager in a plastic glass or looking at dead crabs, but you’ll feel superior.

Be a tiresome know-it-all

Did you know Clacton-on-Sea was regarded as a possible beachhead for French invaders during the Napoleonic Wars? Swotting up beforehand will enable you to share extremely dull ‘educational’ facts, eg Llandudno is one of the few places in the UK with ideal nesting conditions for puffins.

Don’t actually go to the seaside

Okay, maybe have a quick look at the sea and the vile, unwashed masses from the safety of your Volvo. Then spend the afternoon in a restaurant trying a Rick Stein tasting menu. That’s what a trip to the seaside is all about.