A MAN’S gallant offer of his coat to a chilly date has backfired by her accepting and wearing it.

Logan said: “Doesn’t she know guys don’t mean it when they offer women their jackets? It’s just a meaningless gesture we make to look nice and hopefully get laid. I thought they taught them that in school.

“If she wanted to stay warm she should have packed a coat into her little clutch bag. Sure, she needs the coat more than me, and I’d be freezing my tits off right now if I wasn’t snugly insulated by this thick jumper, but it’s the principle I’m mad about.

“I couldn’t even feel all manly and protective as I slipped it over her shoulders because she nearly got make-up on the collar. That jacket’s new and she’s probably going to f**k it up by pulling it around her.

“Would it spoil things if I immediately asked for it back?”

Hollis added: “I had to drop hints about how cold I was half a dozen times before Tom offered his coat. It was a test and he failed. No sex for him.”

In a car park, and four other grim as shit places to have your first kiss 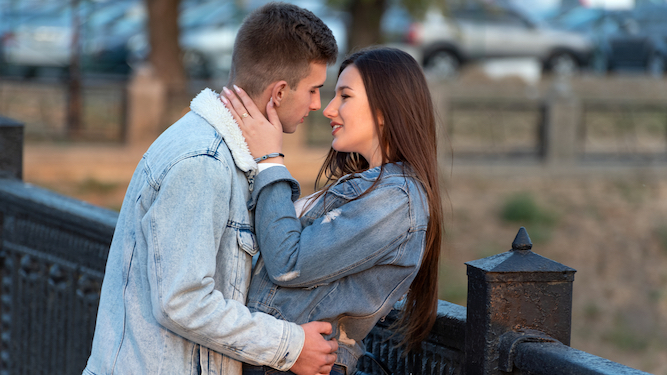 FIRST kisses are awkward, unsatisfying and not very romantic. So it makes sense they take place in these grotty locations:

In a freezing park

Walking hand-in-hand with a date through Central Park on a cold winter’s evening before leaning in for a kiss, the lights of New York twinkling in the background, is undeniably romantic. Sadly you  were raised in Barnsley, meaning your first snog took place on a windswept, disused football pitch nearly as awful as the kiss itself.

In a car park

Romcoms don’t usually end with the happy couple finally locking lips in a car park for a reason, and that’s because a backdrop of poorly parked Volvos looks depressing as f**k. But there aren’t many places for frisky teenagers to hang out so they make do with a vista of chipped concrete spattered with bird shit.

At a school disco

Movies lied to you about school discos. They aren’t elaborate events with laser shows and mirror balls and you were an idiot for thinking they would be. Yours took place at a community centre that usually hosts AA meetings, and your first kiss happened in the same spot where some poor divorcee admitted he drinks five whiskeys before 10am.

The back seats of a cinema

This dark, secluded place might feel like the perfect location for a first kiss, but it lulls people into a false sense of security. Remember how you misjudged the situation by blindly leaning in for a snog but ended up tonguing an ear lobe because your date was staring straight ahead watching Twilight: Eclipse? Your date does. It still disturbs them.

The loading bay round the back of a Sainsbury’s is one of the weirdest places for a first kiss, but when you’re a teenager who hasn’t got to first base you can’t afford to be picky. Even now the sound of a haulage lorry pulling up to unload palettes of frozen mince takes you back to that magical moment. Shame the driver watched though, it killed the vibe.