A WOMAN is confused about why her boyfriend will not share his toothbrush when he’ll happily put his mouth on the area she pisses from.

Lauren Hewitt cannot understand why Nathan Muir is worried about catching something while brushing his teeth when he has no concerns about the disgusting germ-swapping involved in oral gratification.

Hewitt said: “Given that he’s not shy in the bedroom, it’s mental that he freaks out whenever I try and have a go with his Oral-B.

“I mean, we went down on each other after coming home from a sweaty night out at a club the other day. And I’d played tennis that afternoon and hadn’t had time to shower. It must have been like licking the floor of a barn.

“Does he think my mouth is worse than that? Or is he so desperate for sex that he would chow down on literally anything if he thought it meant he’d get a reciprocal nosh? I suspect the latter.”

Nathan Muir said: “I’ve heard about what women do with electric toothbrushes. It starts in her mouth, but who knows where it’ll end up?”

What weird countryside tradition will twats near you be doing this year? 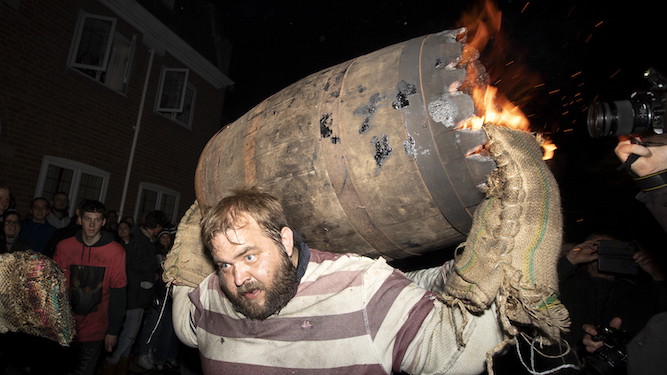 BRITONS love traditional activities like torching a policeman in a giant wicker man. Which barmy pursuits will your local folk be doing this year?

If the idea of risking life and limb chasing a wheel of cheese down a near-vertical gradient is for you, then go to Cooper’s Hill near Gloucester and compete against lunatics and masochists from all over the world. Don’t worry if you realise you’ve got something else on that day and can’t make it: simply step out into busy traffic to achieve the same number of broken bones.

Would you enter a competition to see who could swallow the most wasps? No. So why do it with the garden weed equivalent? Two teams race to consume a large amount of prickly foliage, presumably ending up with horrifically swollen faces. At least it takes place on a cider farm so you can drink the pain away afterwards.

During the Wars of the Roses the soldiers ran out of ammunition, but rather than simply stopping fighting they threw their lunches at each other instead, like twats. In Ramsbottom, the townsfolk have kept the memory of this noble event alive by competing to knock Yorkshire puddings off a twenty foot plinth by throwing black puddings at them. It will surprise no one that this is a pub-based event for English people.

Fancy hoisting a barrel of burning tar onto your back and racing a fellow mentalist up and down a street in the dark? Well, you can in Ottery Saint Mary. Why you would is another matter, but presumably it’s because you’re so shitfaced that you’ve lost all sense of reason and any instinct for self-preservation.

Since 1612, usually sane people in Chipping Campden have been filling their pants with straw, embracing and then kicking the shit out of each other with steel toe-capped boots. The winner of this traditional Cotswolds mating ritual is the one left standing after the other competitor’s leg bones have been reduced to mere splinters and they collapse.