Pissing on the toilet seat, and your boyfriend's other favourite hobbies

WHILE your boyfriend may have some virtues, it’s hard to look past these profoundly infuriating habits:

Despite making fun of you for having so many hair and beauty products, you notice that some seem to be running out much faster than they should. That’s because he’s been secretly using your fancy shampoo on his pubes and testing your anti-wrinkle cream on his scrotum.

No matter how many times you suggest that he either a) lifts up the seat prior to urinating or b) learns how to use his penis properly, you invariably end up sitting on disconcertingly damp toilet seats. He does this so often that it can only have become some kind of sick game for him.

He complains about you leaving hair in the shower plug hole, but every time he trims his beard it looks like someone has been clipping a massive stiff-coated dog in the bathroom. He seems to have set himself the task of covering every item close to the sink in as thick a layer of facial bristles as possible.

Failing to do laundry

Despite the fact that he works as a computer programmer, when he’s confronted with a washing machine your boyfriend’s level of technical skills revert to that of a 17th century cowhand. He will dumbly paw at the machine, accidentally turning on and off rinse cycles, until it’s easier to do it f**king for him.

You’ve met his family. They seem like normal, clean people, which makes his habit of leaving toenail clippings everywhere even more confusing. Perhaps you could gather the clippings, use them to clone him, and then teach that clone to not be a prick that leaves its toenail clippings spread like confetti across the carpet. 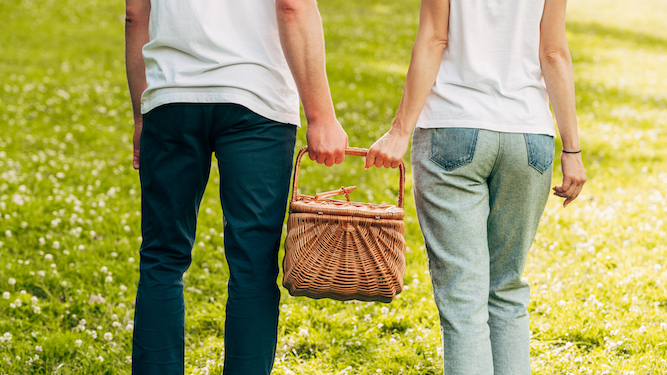 DRAGGING damp sandwiches into wilderness to be bothered by wasps has been confirmed as the most stressful way to eat a meal.

Research by the Institute for Studies found that the only people who enjoy consuming food without a chair, table, crockery and hygienic surroundings are depraved masochists.

Professor Henry Brubaker said: “The people we surveyed complained about the usual things: the weather, being swarmed by insects, the fact that cling film turns anything wrapped in it into a sweaty, squishy pulp.

“Also mentioned was needing stitches after being attacked by rabid seagulls and being struck by lightning while sheltering under a tree eating crisps in a thunderstorm.

“However, despite this reality, picnics have developed a romantic image and people persist in attempting to enjoy them, spending hundreds of pounds on things like foil-backed blankets as if it will stop them nearly being trampled by cows.