HONESTY is great in theory, but it’s also a good idea not to ruin your relationship. Here are some situations where barefaced lies are morally the right thing to do.

Well, not really. The truth is you fancied her more attractive friend, but after spending half the evening unsuccessfully trying to pull her you had no option but to go for Plan B. Women, you’ll find, tend not to like being told they were Plan B, yet again proving honesty is bollocks.

She’s spent a sodding fortune at the salon and, if the truth be told, you can’t really tell the difference. Admitting this will result in weeks of stony silence, definitely no sex, and she’ll feel the need to go back to the hairdressers and spaff another 80 quid to put it right. Lie through your teeth. It really is the only option.

‘I still find you attractive’

Relative to your unashamed slob friend ‘Fat Gary’. But to be honest she’s not exactly put up a brave fight against cake either. Best to maintain a conspiracy of lies. No one’s having sex these days because of streaming anyway.

Those little funsters, with their endless tales of how cute she was as a baby and postwar rationing – not to mention their fascinating conversations about the route you took getting there (it’s quicker to take the A419 then the A38, B302 and A33). You’re happy to overlook the fact that they hated you for years. And you’re not just saying that because you’ll inherit their house – the f**king freaks seem to be getting healthier as they get older.

‘I feel really safe with you driving’

Weapons-grade bollocks. He drives like a twat and even the shortest of journeys causes visions of dying in a heap of tangled metal. Meanwhile she drives without paying attention to nuisances like other cars and traffic lights, causing him to instinctively try to control the car with invisible foot pedals. However for the sake of your relationship it’s best to maintain the lie. The airbags will probably protect you from the worst of the impact.

‘I believe in you’

Although they’re not very specific about it. You think it means they believe you’ve got the drive and talent to get a high-powered job you’ve applied for. They might actually mean you can just about be trusted to push the hoover round without f**king it up. With supervision, of course.

'May contain prosecco' t-shirts, and other ways Brits pretend their rampant alcoholism is fun 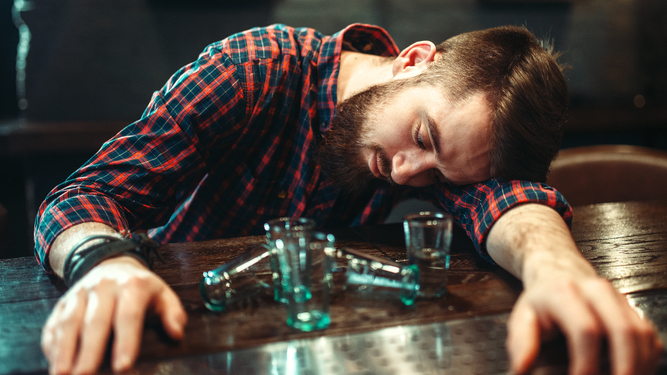 IT’S hard to believe, but we Brits like a few drinks. However the last thing we want to do is take punishing our livers too seriously. Here’s how to keep terrifying levels of alcohol consumption fun.

Work is one of the few places Brits can’t get absolutely wrecked, unless it’s dressed up as a ‘lunch meeting’ or ‘team bonding’. A birthday, a new employee, a mass redundancy – there’s a dubious reason to head to the pub every single Friday. Drinking a Jager Bomb out of your shoe while your bosses cheer you on is just a form of ‘continuing professional development’.

You can easily swig seasonal tipples all year. The first rays of spring sunshine? Hit the Aperol spritz like you live in f**king Capri. Summer? Cider and chilled wine. Every afternoon. Hot toddies will see you through gloomy autumn to Christmas, when it’s mulled wine, snowballs and everything else you drink anyway. Always look reluctant to accept a drink and say ‘Oh go on then’. That stops you becoming an alcoholic.

In terms of hiding in plain sight, it’s hard to beat an allegedly hilarious, booze-themed t-shirt basically calling yourself a pisshead. For some reason prosecco features heavily: ‘Save water, drink prosecco’, ‘Prosecco made me do it’, ‘My blood type is prosecco’. Other sparkling wines must be furious. ‘Crapped the bed on Cava’ might work.

Note: There are far fewer male equivalents, so you’re stuck with things like ‘Instant arsehole, just add alcohol’. Less funny due to you proving it completely true on various occasions by collapsing immobile on the pavement, being sick on your girlfriend, etc.

For most Brits a holiday is just a thinly-veiled excuse to get paralytic. Traditionally, that starts at the airport. The transient nature of a departure lounge makes time a more abstract concept, so it’s perfectly normal to have a few sociable pints of Stella at 7am. If you can couple it with a fry-up, even better. Because it’s a scientific fact that any booze you drink while eating a Wetherspoons breakfast doesn’t actually count.

Popular with students, stag dos and other groups of complete wankers, drinking games are great if you like going from sober to blackout drunk with none of the fun bits in between. All you have to do is mess up the rules of Fuzzy Duck a few times and bingo – you’re not just pissed, you’re willingly taking an ashtray full of lager, rum and sambuca and downing it in one.