A COUPLE have decided to ruin their home, the best years of their lives and ultimately their relationship by getting a dog.

Joe Turner and Eleanor Shaw, despite being in their early twenties when they should be enjoying freedom they will never have again, have decided to tie themselves down to always being home, walks in the rain and picking up warm fresh shit with their hands.

Shaw said: “It’s going to be so much fun playing with our doggie, though not the kind of fun that involves a spontaneous night out partying, or any holidays that aren’t on a Camping and Caravanning Club site with UKIP-voting retirees.

“He’ll really make this house a home, which is good because we’ll be stuck in it forever due to most tenancy agreements banning pets.

“It’ll be a real shame when we split up because we both feel trapped and stifled by our relationship, by which we mean the never-ending responsibility and vet’s bills for the fucking dog.

“Of course, I’ll be heartbroken when I persuade my mum to take him on and immediately emigrate to make sure I never see that barking bastard ever again.

“Still, it’s all worth it for five months with a puppy.”

Man trying to convince wife he needs a flamethrower 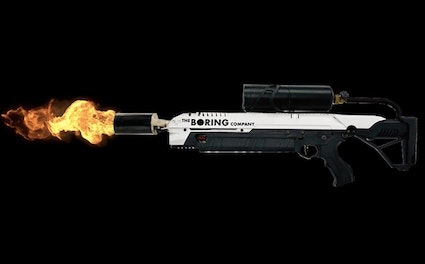 A MAN is desperately trying to convince his wife that he needs to spend £500 on a ‘compact’ flamethrower.

Bill McKay told his wife Sarah that it was a logical decision and he cannot believe he has coped this long without one.

McKay said: “The more I thought about it, the more inexplicable it was that I had never owned even the most basic flamethrower.

“It would be the best £500 I’ve ever spent and if anyone says otherwise they can tell it to my flamethrower.”

When asked to name just one legal and non-destructive use for the device, McKay admitted his plans were based largely on ‘societal breakdown’.

Sarah McKay said: “I don’t trust Bill to light the barbecue, so in an ideal world he wouldn’t be armed with a deadly fire catapult.

“Then again, he may end up burning down his shed which is full of his other stupid, pointless crap.”