MOST people would have sex with basic robots that don’t even have faces.

Researchers into the future of human/machine relationships found that most people were not bothered about robots getting super-lifelike before they start having intercourse with them.

Carpenter Wayne Hayes said: “After fifteen years of marriage I’m quite prepared to go C3PO, if you get my meaning.

“A vending machine with a waist-height chute and a photograph of Scarlett Johansson stuck to it would be fine.”

Robotics will be able to produce realistic machine prostitutes within the next fifteen years, although this could be reduced to a decade if people stop phoning to ask if they’re nearly finished.

Perhaps your concern could extend to not eating us, say chickens 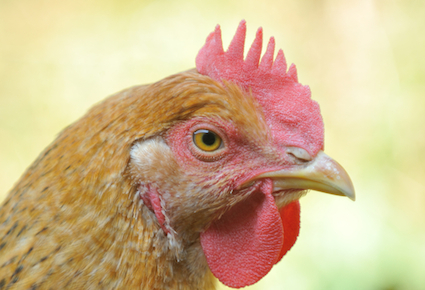 CHICKENS have thanked consumers for their concern over methods of slaughter and asked if that goodwill could be extended to just leaving them alone.

As Pizza Express confirmed all their chicken meat is halal, Britain’s favourite birds stressed that being stunned before having their throats cuts in the traditional Muslim fashion was ‘small consolation’, and that, ideally, they would prefer to live in an orchard.

Jane Thomson, a four month-old chicken from Lincolnshire, said: “If I was a Pizza Express customer I’d probably want to know if they were using religious methods of slaughter, but it’s a moot point because I’m not a huge fan of pizza and I’m a prisoner in this massive shed.

“Still, it’s nice to know that before you shove me and all of my friends into your fat faces, you’re terribly worried about how we spend our last moments. You’re an amazing species and our admiration for you is boundless.”

Ms Thomson added: “Funnily enough, the humans who spend their meagre salaries at the popular chicken outlets are the ones with whom we feel the greatest affinity.

“Perhaps one day we’ll all live together in a big orchard and you can give us corn and we’ll give you eggs and no-one needs to die.

“Anyway, that’s my tuppence worth.”