A SCIENTIST has concluded that all women are attracted to both sexes, especially his long-term girlfriend and her best friend Mandy.

Dr Nathan Muir’s extensive research, which began when he was only a teenager, has collated more than 10,000 hours of taped evidence proving that all women can find another woman attractive if they just give it a try.

Dr Muir said: “Of course, there’s only so much that can be done in the theoretical sphere.

“Certain key indicators, notably the glint in Mandy’s eye when she’s had a few gins and my partner’s tacit encouragement of her flirtatious behaviour, lead me to believe that a practical experiment would be advisable at this stage.

“If anyone needs me to make some litmus paper change colour or anything, just as proper scientific proof, I can do that.” 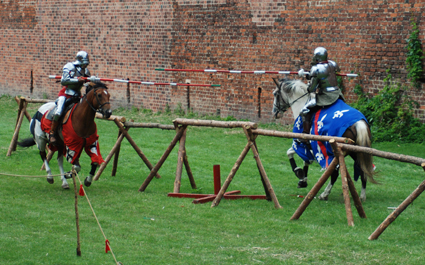 AFTER repeated injury problems, Arsenal has decided to remove medieval combat from its weekly schedule.

With Aaron Ramsey suffering from a hamstring problem, Hector Bellerin shrugging off a groin complaint and Jack Wilshere out for several months with a lance embedded in his skull, the club has been forced to reconsider their training regime.

Club doctor Tom Logan said: “Arsenal’s players work harder than any other Premier League side’s to ensure they’re ready for whatever is thrown at them, especially boiling oil or spears.

“But we’re starting to wonder if perhaps we should put less of a focus on jousting and sword fighting and just practice passing a ball around.

“It’s tough for Arsene Wenger when the fixtures are coming thick and fast and you’ve lost key players to horse tramplings, spear skewering and decapitations. For most clubs even one decapitation per season is too many.”

However, while Wenger has partially relaxed his training regime, the French tactician will still force all members of his squad to attend training sessions in full chain mail.

He said: “I see my team as an army and like an army I want them to be tough, well-drilled and harrowed by the horrors they have seen.

“If a player can’t take the odd flaming arrow to the neck from a teammate then what chance does he have on a wet Tuesday night in Stoke?”