AirPod headphones are supposed to be inserted anally, confirms Apple 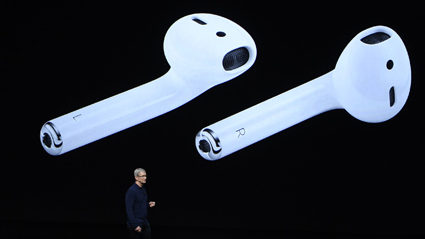 AIRPOD ‘headphones’ are designed to be worn inside the rectum, Apple has confirmed.

CEO Tim Cook explained that the tiny pod-like wireless devices should be coated with petroleum jelly and gently inserted into the user.

He said: “The human rectum is surprisingly receptive to sound waves, it’s actually like a ‘third ear’ and you will love feeling the bass right inside you.

“I wouldn’t want to leave them in there too long though, something bad might happen. That’s why the battery life is quite short.

“You can wear them in your ears too, although I wouldn’t recommend switching between the two regions. Choose your favourite and stick to it.”

He added: “Best of all, it’s so discreet. I’m wearing some now and you didn’t even notice.”

Apple fan Tom Logan said: “This is the perfect way to enjoy a free U2 album.”

Corbyn and Osborne to share constituency with hilarious results

JEREMY Corbyn and George Osborne are to share a constituency in a sitcom-style ‘odd couple’ scenario.

With both MPs’ constituencies due to be abolished, the Boundary Commission felt the best solution was for them to share an office and have frequent comic misunderstandings.

A spokesman said: “We envisage Jeremy and George sitting at desks in the same room, with administrative support provided by a long-suffering secretary who rolls her eyes a lot.

“This will save taxpayers’ money, allow them to exchange quips and compete for the affections of attractive female constituents visiting to complain about potholes, or, more likely, immigrants.

“Osborne will probably say things like ‘I’ll be spending the weekend at my estate’ and Jeremy will reply, ‘Aye, and not the sort with a bleedin’ burnt out police car in the middle!’”

Osborne said: “I’m not in favour of the arrangement because that dreadful little scruffbag Che Guevara will lower the tone of the whole constituency. What will the neighbouring MPs think?”

Corbyn added: “I’ve agreed to it on the strict understanding that romance doesn’t blossom between us like Michael Elphick and Angela Thorne in Three Up, Two Down.”